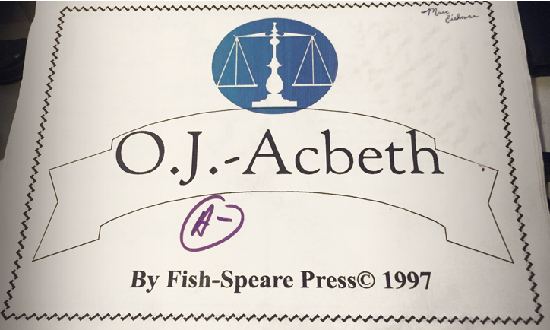 While trolling my Facebook feed for potential Kickstarter backers the other evening, I ran into an errant picture from a pair of sisters I’d grown up around since kindergarten. They were smiling and hugging their father, my former freshman year honors English teacher. I will spare you the visceral detail, but suffice to say he didn’t look to be in the state of health I might have otherwise thought he’d be in. A quick message to his daughters later and I’d been given some sobering news: the whole ordeal, after being explained, left me in a bit of a stupor. Just seeing his face again had unlocked the door to my memory palace (as Hannibal might say, before dining on one of my sundry organs), and the resulting flood of flashbacks has remained floating in the front of my mind ever since.

I was a smart kid. Not a genius bound for a Baxter Building mind you, but always labeled bright. Learning came easy enough to me. Accelerated math? Why not. English composition and literary comprehension? I could read, absorb, and write with laughable ease. While compatriots in class struggled with social studies, or science experiments, I’d hunker down at the dining room table for an hour and be ready to go the next day with aplomb. It’d been that way from the second I walked into my elementary school, clear through to the day I waltzed out of junior high. Clearly high school will be a piece of cake, and colleges will knock down my door, I’d told myself. You see, when you’re gifted, you wind up narrating your own life in the present-tense, to ensure you’re on the right path.

And then, on my very first day at Homewood-Flossmoor Community High School, I sat down – smirk cemented in place – in Mr. Ken Pries’ Honors English class.

Mr. Pries was as all teachers were at my alma matter: awash in Eddie Bauer, astute, and approachable. But behind the unassuming suburbanite facade lay a taskmaster like I’d never been privy to in the past.

“I warn all my students who enter this class that I am a not an easy grader. Up until this point, you’ve likely enjoyed the easy life when it came to your compositional skills.” He announced this to us milliseconds after the first bells blared. “I am here to challenge what you know, and how you choose to communicate it.” And with those words, the first text was passed out, a tome of Greek mythology. Really, Mr. Pries? You’re going to get my goose by giving me the comic books of the English-class world? My smirk remained unscathed.

The first paper was dispatched as all others had been up to that point: hastily heaved from my drifting mind, peppered with pretentious prose (so as to prove to the given educator that I knew the big words too) and never given a second glance before being spit out of the inkjet printer, sloppily stapled but beautifully designed, with perfect typographic presentation. It was returned to me with a hastily etched C- and the scrawled epitaph “Consider trying harder next time.”

I’m fairly certain you could hear my heart flop to the floor with an errant splurch. This clearly wasn’t a slip of the grading pen. The continual avalanche of footnotes, hash marks, and frowny faces sliced through my assignment as it did my self-worth. Try harder? Those words had rarely, if ever, been muttered to me. And never before did they feel as real as they did now… towing a barely passing grade at the hilt.

Mr. Pries exhumed an emotional response in me that was foreign. Here was a man who clearly saw through every ounce of B.S. I’d used up until that point to curry favor from the adults who oversaw my age of enlightenment. I was laid bare, left to produce actual thoughts, actual facts, and then present them without error. I was no longer given a book and casually asked to regurgitate the prose in different words to prove I’d read it. I was given assignments forcing me to make arguments and defend them. In the simplest of terms, I was challenged to prove I was more than just above average. And for the first time ever, I honestly questioned if I really was.

After shakily earning my way into a solid B average in the class, we tackled the final unit: Shakespeare. By now, conditioned into a state of never-not-panicking, I’d mentally prepared myself for the fall. But after a year’s worth of truly hard work, the final assignment given seemed like a practical joke. We were to reinterpret any scene of the bard’s and apply it to a modern day event. At the time, O.J. Simpson and his trial were a prevalent source of comedic material. As such, I toiled to create a reinterpretation of the witch’s scene in Macbeth, rooted in the minutiae of the Simpson murder trial. I poured myself into the prose. I added helpful footnotes and stage direction. I even took the time to ensure the entirety of the scene rhymed. I turned it in, my once signature smirk now replaced with that face a puppy makes when it has an accident on the rug. A few days later… “O’ Jackbeth” was returned to me.

Of the few remaining tokens that remain of my high school career, my now curled-and-weathered final assignment of Mr. Pries’ class remains my most cherished. It represented a year’s worth of emotional growth. The “A-” that adorns my cover page – complete with Microsoft Word clip art – exists as the grade I strive for in my own life. As Dr. Huxtable might say, it was a “Hard A” that proved to me after being shaken to my core, that I had real value to share with the world. Even if that value was in a light-hearted parody of Shakespeare where the ghost of Judge Ito scorned a repentant O’ Jackbeth. It was the success of that assignment that allows me to tell people of what fills me with professional pride today: a story about Samurai-Astronauts, led by an immortal kung-fu monkey master, defending humanity from a band of zombie-cyborg pirates… in space!

Ken Pries was the first teacher who showed me that he believed in me but wasn’t content with the me I chose to be. It’s because of that notion – of tough love, and the lessons of a life well earned – that I even chose the arts as a career. Art was, after Mr. Pries’ class, the biggest challenge I’d ever undertook. And when I formed Unshaven Comics with my lifelong friends, it was Mr. Pries’ class that comes to mind. When I finish a panel, a page, or even a single piece of dialogue, I no longer execute it with a snarky confidence. Instead, I silently recall that feeling of never quite knowing if I’ve done something right, silently kicking at my heart… still listless and lingering at the base of my feet.

“I am here to challenge what you know, and how you choose to communicate it.”

The lesson will never cease to educate me, Mr. Pries. Thank you for that.