‘ALL’S FAIR IN WAR’ WHEN FORTIER TAKES ON DOMINO LADY! 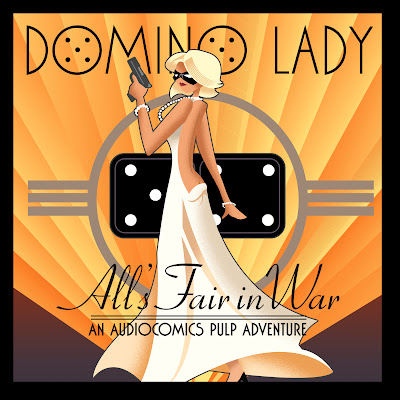 One of the truly wonderful and totally unexpected results of the new renaissance in pulp fiction has been the resurgence renewed interest in old time radio dramas.  And what better subject matter for these new audio outfits then the classic pulp heroes of the 1930s and 40s.  Several companies have started producing audio books from the original pulp magazines and now for the very first time pulp fans can “listen” to the adventures of the Spider, Secret Agent X and many others.
Of course as all pulp fans know, there were very few lady avengers and the clear cut leader of that small group was writer Lars Anderson’s Domino Lady.  Now Audio Comics out of San Francisco, directed by Lance Roger Axt, has produced a truly marvelous original Domino Lady radio drama written by Rich Harvey and acted by a truly inspired cast.
In San Diego for the new Pacific Coast Exposition, Ellen Patrick, daughter of the former State Attorney General, is only too willing to contribute financially to the mega event which will bring much needed revenue to the popular seacoast community.  When someone breaks into the aptly named Crime Does Not Pay pavilion and walks off with a unique one million bill printed by the Federal Reserve, it spells disaster for Mayor Benbough and his planning committee. Unless the bill can be recovered, the insurance company will demand restitution from the city and in the process bankrupt it.
Once again, the beautiful and audacious Miss Patrick dons her gown, cape and as the  Domino Mask slips into the fair grounds to do her own investigation.  She is nearly captured by her former paramour, private eye Roge McKane, on duty as the exposition’s chief of security.  The inter-change between these two is pure sauciness with double-entendres flying left and right and had this listener laughing aloud.
ALL’S FAIR IN WAR is a superb audio treat with great writing, perfect acting; especially by Karen Stillwell as Ellen Patrick/Domino Lady and Peter Carini as McKane.  The blues/jazz soundtrack is also a gem and easily sets the story’s atmosphere.  If we have one complaint is that this is only the opening chapter in the series and ends much too soon, leaving us wanting a whole lot more.  Axt and Audio Comics have produced a top-notch audio recording that is pure pulp goodness.  We recommend you order you copy now.  You thank us later.
Cast & Crew –
Karen Stilwell as Ellen Patrick/The Domino Lady
Peter Carini as Roge McKane
Mandy Brown as Dottie Jaster
Peter Papadopoulos as Dan Carley
Kevin Donnelly as “Moxie”
Bill Chessman as Samuel Benton
Lance Roger Axt as Mayor Benbough and your Narrator
Christine Marshall as your Announcer
Additional roles portrayed by the members of the Pulp Adventures Acting Company
www.audiocomicscompany.com is the URL for purchasing direct: also, we will have links to where All’s Fair in Warcan be purchased via iTunes, Amazon Mp3, Zune, Rhapsody, Nokia, and eMusic starting next week (or I should say, when it’s up on  iTunes, Amazon Mp3, Zune, Rhapsody, Nokia, and eMusic). Thanks!
www.audiocomics.wordpress.com
Share