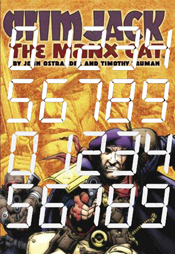 So – what does that mean? What might it mean? Let’s do a little idle speculation and what I would like it to mean. Maybe you would, too. Let’s compare note.

More readers. Actually, this isn’t just a wish, it’s a necessity. Not that there’s anything wrong with the readers that we got; you guys is swell. But we need more in sheer numbers and that’s the point of going digital: comics need to go where the eyeballs are and that’s on the web. Nor is it enough to just preserve the status quo. We need to increase the readership, meaning new readers, and that involves some of trick below.

Lower prices. I think this mandatory. The jury is still out as to whether folks on the web will pay anything – lots of folks online are used to and defend downloading for free – but I don’t think they’re going to pay $2.99 for 22 pages of story. Also, the costs of producing the product is less: no printing, no shipping, no cost of paper. Yes, the companies have to pay for access to whatever reader they’re using, but I’m betting it’s less than the cuts taken by retailers and distributors.

By the way, if the companies want to keep the retailers open and in business (which I think is a swell idea) I’d ditch the same day digital sale thing. Put it digital after a week; by that point, most retailers will have sold most of the copies of a new issue that they’re going to sell and those who want to buy the digital copy probably won’t care.

I’d also make some books dirt cheap as ways of enticing the reader in. Either books specially created for digital sale only or well known existing titles. One Superman title, one X-Men title, one Batman title, one Spider-Man title and so on. The point is to get people who aren’t reading comics into the digital shop to sample one. Actually, that’s what happened to me when I discovered Marvel. I was attracted to Spider-Man 49, bought it, read it, wanted more, and they in-house ads put me wise to the plethora of other Marvel mags. I got into almost all of them.

I’d also bundle titles and sell them for a monthly subscription fee. All the Batman titles, all the Avengers titles, and so on. Bundle them at one price that the company keeps taking every month. Make it cheap enough that, once the reader subscribes, they won’t take it off because it’s easier not to.

Hey, I love superheroes and most of my career has been with them. But if comics is going to rope in more readers, they have to appeal to more tastes. News flash: women read. A lot. Several of them read comics. I’ve also discovered they are very loyal readers, often more so than guys. Any chance we could think outside the box and maybe create comics for them? Especially on the Internet? Look at the graphic literature that’s already out there on the web and learn from it, folks. Doing the same old same old ain’t going to cut it.

I‘m assuming all this has already been by the folks running the companies; I know a lot of them, they’re not dummies, and they are not religiously opposed to making money. I’ll be the first to admit I don’t know all the ins and outs (or any of the ins and outs) of this bravish new digital world. I want comics to success as a business if only for selfish reasons – it’s how I make my living. So I live in hope.

Let’s gather again in, say, about a year and see if any of this has happened or what has happened. Assuming we’re all here at that time. As a friend of mine, Joe Edkin, is wont to say, “Live in hope, die in Poughkeepsie.”