CAN THE WRAITH SURVIVE THE CRY OF THE WEREWOLF? 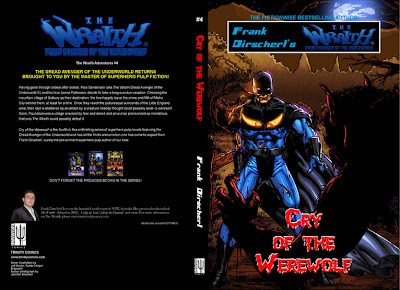 New Pulp author and Trinity Comics publisher, Frank Dirscherl shared the following information about the upcoming novel, The Wraith: Cry of the Werewolf with All Pulp.

My latest novel (a look at the cover is attached), the fourth in The Wraith Adventures series, CRY OF THE WEREWOLF, will be released for sale on May 18 from my own Trinity Comics. You’ll be able to buy (initially) direct from my online store, as well as from Amazon, Barnes & Noble and all other online and bricks and mortar stores shortly thereafter. EBook release will coincide with the print release.

Below is the book’s rear cover blurb:

Having gone through ordeal after ordeal, Paul Sanderson (aka The Wraith Dread Avenger of the Underworld ®) and his love Leena Patterson, decide to take a long overdue vacation. Choosing the mountain village of Bidbury as their destination, the two happily leave the crime and filth of Metro City far behind them, at least for a time. Once they reach the picturesque surrounds of the Little England area, their idyll is shattered by an attack by a creature nobody thought could possibly exist—a werewolf. Soon, Paul discovers a village wracked by fear and deceit, and an evil so pronounced, so monstrous, that only The Wraith could possibly defeat it.

CRY OF THE WEREWOLF is the fourth in this enthralling series of pulp novels featuring the Dread Avenger of the Underworld, and has all the thrills and emotion that one has come to expect from Dirscherl, surely the pre-eminent superhero pulp author of our time.

Thank you, and I hope everyone who chooses to buy this enjoys it. I put a LOT into this book, and I hope you all give it a chance and thoroughly enjoy it. Thank you again :)