REVIEW: Felicity Seasons One and Two 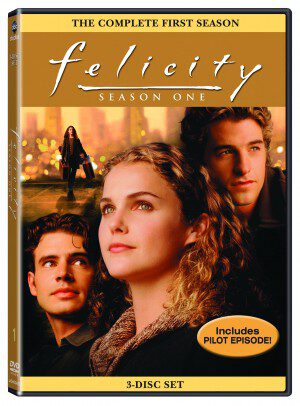 Before Star Trek was Fringe and Lost, and Alias and before Alias was Felicity. It may be hard to recall that genre wunderkind Abrams actually broke into television by making a splash in 1998 with the WB series about a college girl. Created with Cabin in the Woods collaborator Matt Reeves, the series is worth a second look given the storytelling, music, and keen eye for casting that first introduced to an armload of performers who have gone on to success, including repeat appearances in later Abrams productions. Or do you think Keri Russell’s cameo in Mission: Impossible 3 was an oddity?

Lionsgate has resurrected the first two seasons in newly packaged DVDs, both out this week. The WB knew that a female-skewing series with a high concept would be a good fit for their struggling network so when Abrams and Reeves turned up with the concept, there was excitement. Susanne Daniels excitedly listened as Abrams outlined a five season arc for Felicity Porter, who would chuck everything she and her parents planned for, to follow a boy from California to New York. The boy barely knew she existed but all it took was for him to sign her yearbook and she was hooked.

So was Daniels who has written, “He brings heart to a pitch and can tell you clearly why anyone would or should care about the world he’s describing. But the single most impressive thing about J.J. is the depth of analysis he lays out in a compelling, almost professorial way. He can tell you everything about every character and their story arcs. And he can tell you how and why his show fits into your network, in the television business, and the world at large, and how the audience will relate to it.” 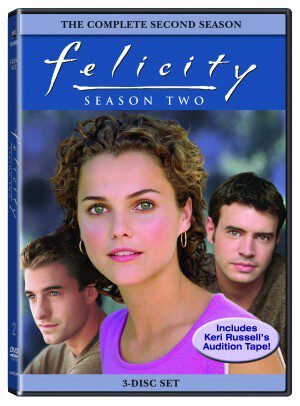 Relate they did thanks to the superb casting of newcomer Russell who was pretty and had an amazing head of hair. But it was her shy Felicity who was coming into her own over the course of the series that won hearts across the country. It was mainly her winning performance that led critics to name the series one of the season’s best when it debuted. Ratings and acclaim followed with Time listing it among their “100 Best TV Shows of All-TIME”.

There was a bit of a disaster when the actress cut her locks, robbing her character of strength and causing critics and network execs to be alarmed, especially when the second season ratings dived before leveling off. It was the second most discussed ‘do since the Rachel. Few credited the ill-conceived move to Sunday nights as a cause for the ratings dip.

Watching the first two seasons with fresh eyes proves the series remains charming and innocent if a tad slow. Personally, I never warmed to the framing device of tapes exchanged between Felicity and the unseen mentor Sally Reardon (voiced by Janeane Garofalo). And it remains somewhat grating today.

It’s far from the mind-bending, fast-paced work later series demanded, but the storytelling remains sharp. Characters grow and develop, relationships feel authentic, and while Felicity is the one most obviously trying to find herself at college, it turns out so is everyone else and no one is perfect. Yeah, some of the plots can be far-fetched or overly dramatic but hey, it’s television. But there’s warmth and heart to the characters which makes up for the melodrama.

Walt Disney Home Entertainment originally released these sets, replacing some of the signature music given rights issues. They’ve been out of print for at least two years so we’re thankful Lionsgate brought these back, complete with the handful of bonus features including five audio commentaries from Reeves and Abrams; the original unaired pilot, Russell’s audition, and the “Emmy Parody”. If you’ve only heard about the series or are curious to see the early work of Abrams, this is a marvelous opportunity.