Thursday, 7:30 PM
October 28th, 2010
The Egyptian Theaterhttp://www.americancinematheque.com/egyptian/egypt.htm
Two Feature Films starring Bela Lugosi in THE BLACK CAT and THE RAVEN. With Boris Karloff.
Mainstream news coverage will be in effect for the Halloween weekend in Los Angeles, the media capital of the world. This is a major launch for the first issue of BELA LUGOSI’S TALES FROM THE GRAVE horror anthology comic book.

Special Guests from Hollywood and the Comic Book Industry will be announced. Other featured guests are Bela Lugosi, Jr., and Kerry Gammill including contributors to BELA LUGOSI’S TALES FROM THE GRAVE horror anthology comic book series.

There will be a Special Panel on Lugosi examing his career and the new comic book between films and a MONSTERVERSE Comic Book Display with contributors featured in the lobby.

An Exclusive Preview Trailer will be screened with art of the upcoming MONSTERVERSE graphic novel, FLESH AND BLOOD, written by Robert Tinnell and illustrated by Neil Vokes. To be unleashed Halloween 2011.

TRAILERS FROM HELL. Commentaries from directors Mick Garris and Joe Dante on Bela Lugosi and his films.

This exclusive event image may be Tweeted with:http://twitpic.com/2mxwhx
MONSTERVERSE is a new independent comic book company with a horror anthology book coming out in October 2010 and entitled, BELA LUGOSI’S TALES FROM THE GRAVE.

Here is a direct link preview of the book and its pages posted on YouTube.
LUGOSI HORROR COMIC YOUTUBE PREVIEW
The comic will be available at comic shops everywhere and online and is distributed by Diamond. For a new independent transmedia company MONSTERVERSE enjoys having the top talents in the world such as John Cassaday, Bruce Timm and the legendary Basil Gogos creating covers for its books. Writer/director (of the upcoming THE WALKING DEAD), Frank Darabont, gave this quote about cover artist Basil Gogos.
“Basil Gogo doesn’t paint pictures of monsters, and never has. What he does is conjure their essences on canvas like a magician. More than that, he conjures our love of these subjects in a manner that defies description or analysis. How does an artist infuse an entire fan community’s love of a whole genre into his brushstrokes? I’ll never be able to explain it, but I know I’ll always be grateful for it. Seeing Gogos’ portraits is revisiting the best friends of my childhood.” – Frank Darabont
Monsterverse was chosen the FEATURED COVER STORY on COMIC SHOP NEWS 1207 a few weeks back (distributed to over 500 of the top comic book shops nationwide and given out to customers with purchases). This article beat out the top comic companies in America, an impressive feat for a new independent publisher.
Take a look at our official website. We are quite proud of the amazing talents involved. 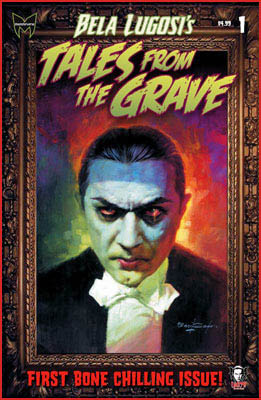 http://monsterverse.com/
MONSTERVERSE and BELA LUGOSI’S TALES FROM THE GRAVE will receive special coverage in the upcoming double-sized Halloween issue of RUE MORGUE.There is a feature story on MONSTERVERSE and BELA LUGOSI’S TALES FROM THE GRAVE also being prepped for their special Halloween issue of FAMOUS MONSTERS MAGAZINE.
MONSTERVERSE publisher Kerry Gammill is creating a terrific new feature cover for the January FAMOUS MONSTERS.
BELA LUGOSI’S TALES FROM THE GRAVE is published by Kerry Gammill who is internationally known for his artist work at Marvel and DC Comics on titles like MARVEL TEAM-UP, INDIANA JONES, POWERMAN/IRON FIST and SUPERMAN. Kerry has also worked as a make-up effects designer on studio genre films such as VIRUS and TV programs such as STARGATE and THE OUTER LIMITS. Here is a link to Kerry’s professional art website:http://gammillustrations.bizland.com/monsterart/
This FANBOY PLANET article can give you a quick update on what is going on with the history of the company and its future plans:http://www.fanboyplanet.com/interviews/mc-monsterverse.php
This link takes you to our first issue cover by the legendary FAMOUS MONSTERS cover artist, Basil Gogos.http://twitpic.com/1doadj
Our variant cover is by one of the hottest artists working in American comic books today, John Cassaday, and who recently directed an episode of Joss Whedon’s DOLLHOUSE television series. Whedon has been tapped to direct Marvel Studios’ epic feature film, THE AVENGERS.http://twitpic.com/25v1o3
The back cover is by Warner Brothers animation executive producer and Emmy-winning designer/artist Bruce Timm. 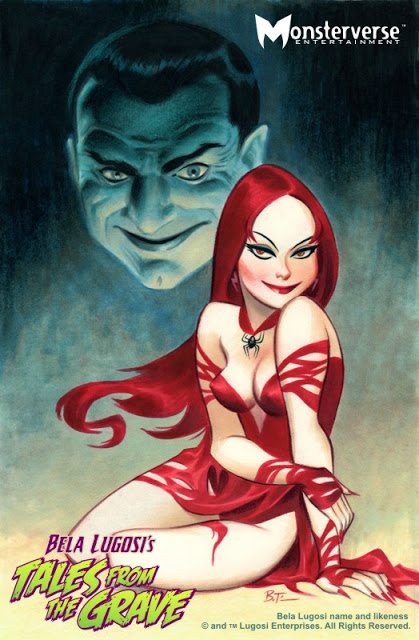 To reserve a copy of the Lugosi comic book at a comic shop you need to supply them with the Diamond Item # Code, AUG101080, with the title, BELA LUGOSI’S TALES FROM THE GRAVE. The first issues of the Lugosi comic book will be shipped in October to celebrate both Halloween and Lugosi’s 128th birthday. A special celebration of Lugosi films, the new comic book and its contributors is set for the American Cinematheque in Hollywood at its Egyptian Theater on Thursday, October 28th.
BELA LUGOSI’S TALES FROM THE GRAVE  will be a double-sized 48-page color quarterly and retailing for $4.99 and with no ads (except for a house ad announcing a serial adaptation of the novel DRACULA and starring BELA LUGOSI by Kerry Gammill and beginning in issue two). It is pure comic book fun and frights from front to back with a brief article on Lugosi.

BELA LUGOSI’S TALES FROM THE GRAVE  will feature some of the most talented storytellers working today in comic books and horror films. No other comic book series has this kind of industry talent nor do other comic book companies have these kinds of horror film heavyweights working on any comic book. This is a first in comic book publishing and dedicated to the fun and classic horror of Bela Lugosi but made for today’s audiences.
Movie directors like John Landis (An American Werewolf In London, Burke And Hare) and Joe Dante (Gremlins, The Howling) along with make-up genius Rick Baker (American Werewolf In London, Michael Jackson’s THRILLER, Men In Black), will be providing stories and art for future issues. More Hollywood horror film creators are also working up stories.
The most acclaimed creators in comics will be writing and drawing stories such as Steve Niles (30 Days Of Night), artist John Cassaday (Planetary, Astonishing X-Men) and Mike Mignola (Hellboy).

MONSTERVERSE ENTERTAINMENT is a transmedia company headed by its publisher and editor, the comic book and film design artist, Kerry Gammill.

Keith Wilson, formerly of DC Comics, is an editor and writer/artist.

Producer/screenwriter Sam F. Park is the west coast editor and a writer/artist.

We’re very proud of BELA LUGOSI’S TALES FROM THE GRAVE  and what has been accomplished within our growing independent publishing venture, MONSTERVERSE. This is our first comic book project with several more in development. We plan to make MONSTERVERSE the go-to company for horror projects in all media.

MONSTERVERSE ENTERTAINMENT’S “BELA LUGOSI’S TALES FROM THE GRAVE” is both a FEATURED ITEM and rated CERTIFIED COOL by Diamond Distribution’s PREVIEWS August magazine!http://www.facebook.com/pages/Dallas-TX/Comics-from-the-MONSTERVERSE/118838267124?ref=mf