Review by Joshua Pantalleresco
I eagerly awaited Brian Wood and Becky Cloonan on Conan.  I’ve been a big fan of Brian’s since he released Channel Zero way back in the mid nineties.  It was angry, rebellious and thoughtful.   Ever since, he has done a number of excellent books including Demo, Local, Northlanders and DMZ.    I’m happy to say so far Conan continues that trend.
This Conan series is a direct adaptation of the story Queen of the Black Coast and deals with Conan’s first serious romantic relationship with the character Belit.  The story begins with Conan’s retreat from the city of argos as he forces himself on board the trade ship Argus.  After a brief and abrupt negotiation, Conan finds himself acquiring passage.
My favorite part of the story is Conan’s story about how he found himself running for his life.  You get a real glimpse with how he found himself running for his life.  Here is where you get a real good glimpse into Conan’s character and I think this in particular is where Brian Wood shines.  Conan’s run in with the law shows that while he is still young and very brash, yet you understand exactly where he is coming from with his actions.
He quickly befriends the ships captain Titus who tells him about the dangerous and beautiful Belit, the fierce queen of the black coast who terrorizes trade ships with her cunning and ruthlessness aboard her ship the tigress.  Conan is enticed by the story as her description matches the stories of the winged goddesses of the north that as a youth he dreamed about.
Finding themselves in her waters, and unable to go back to Argos because of Conan, they press on.  Shortly thereafter Belit enters the book right at the end with her and Conan looking eye to eye.
Issue two is the battle between the Argus and the Tigress.  Another great little touch in this book is Conan firing arrow after arrow into the Tigress’ crew as the ship approaches.  He has the opportunity to perhaps hit Belit and waivers.  He says crom as he fires.  Did he want to miss?  Or was he regretful that he was about to kill her?
The battle intensifies and Conan witnesses the death of Titus and vows to go down swinging.  He becomes an angel of death and proceeds to cut down anything in his path.  In the end it’s Conan facing down the whole crew by himself.  That fight is interrupted by Belit, who views Conan in much the same way he does her; a myth made real.  She makes an offer that catches him completely by surprise and ends the second issue right there. 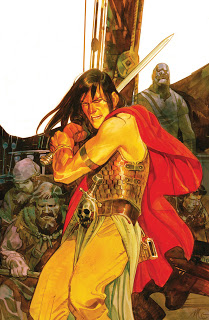 This review wouldn’t be complete without mentioning Becky Cloonan.  Her Conan is devious, young and clever.  Her Conan isn’t the muscular Arnold Schwarzenegger type.  He looks like a lean and capable warrior, which is probably a lot more realistic.  And she nails the character perfectly.  Those splash pages on page two and three of issue one is perfect.  My other favorite conan is him standing definitely aboard the tigress just daring them to come at him, outnumbered and outgunned.  She gets Conan and manages to mix honor and brashness into his demeanor.
Belit is beautiful, bold and clever.  Page 1 she looks absolutely fierce and as defiant as Conan is later in the issue.  She hasn’t been featured in the book as much as Conan as of yet but I know that will change from here on out.     When she has been on screen she has been able to captivate the pages she has graced herself into.  All in all, you have two very strong and clearly defined characters.  It’s a strong start and worth a read.
Issue three is out now.  I suggest you go and pick it up along with the first two issues.  You won’t be disappointed.  I can’t recommend this book enough.
Share