A large portion of America is all about Hollywood. Who’s the new big star? What new movie is coming out? Which director will blow us away this year? Understandably, we have so many struggling artists – actors, singers, writers, directors all trying to find their big break – that it’s become cliche.

Likewise, we comic fans have similar feelings towards our books. Who’s the new big writer? What artist is going to knock or socks off with photo-realistic work? What new title is going to give us a new reason to love comics? How many more teams will Wolverine join before people realize there must be at least three of him?

But what if … what if these two paradigms were merged? What if strange beings with exotic looks and super-human abilities made their way to California and waited on tables while they auditioned to star in a comic book? What if a lad who was born with blue-skin and antennae was able to be an extra in an Image comic while he dreamt of one day starring in his own on-going series?

This is the premise of [[[Toupydoops]]], written and illustrated by Kevin McShane. Toupydoops is 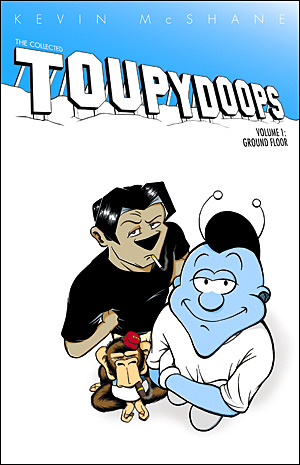 the afore-mentioned blue-skin lad who comes to LA and tries to make it big in comics. Accompanying him is Teetereater, a bear he went to college with, and the notorious Mr. Bananas, a cigarette smoking monkey who spends most of his time playing video games and seemingly wishing he wasn’t frequently bothered by the outside world.

This isn’t a glowing success story, though. This is a series that fans can relate to. Even when Toupy seems to land a good gig, it either turns out to be not at all what he hoped for or he later screws himself out of the job. And adding to his frustration, he constantly finds himself in embarrassing situations which feel all the more ridiculous when he sees how well things always work out for Teetereater, who doesn’t even try yet somehow always manages to come out on top, such as when he’s randomly asked by attractive neighbors to be the judge in a sex competition.

Despite his occasional envy of Teeter, Toupydoops loves the guy like a brother and their comraderie is very natural. In just a few pages, you understand that these are guys who will take a bullet for each other as easily as they’re willing to pull a prank at the other’s expense. The dialog between them is both witty and real. And the art is high quality as well. A lot of independent ventures have art that’s either quite amatuerish or has a generic feel to it. McShane’s pencils and inks are clean, precise and have a signature look to them.

What’s more, this is not just a sitcom where Toupydoops has to figure out how to replace a priceless work of art he accidentally broke or where Teeter tries to figure out what to do when he schedules two different dates on the same night. This is a rated-R comedy with sex jokes aplenty. This is a book where Teetereater eagerly shows up fanboys who claim to be die hard Alan Moore fans yet don’t know that the cast of [[[Watchmen]]] was based on Charlton Comics characters. This is a book where violence is most definitely the answer and where pretty girls in bars will actually walk up to a man with blue skin and giggle as they ask, “Are you Dr. Manhattan?”

In short, this comic is just plain fun and original. And god knows we need more of that on the shelves.

Cosmic Comics called Toupydoops “Unlike anything on the shelves,” and The Fourth Rail referred to it as “An indy diamond in the rough.” I can’t help but agree.

The first five issues of Toupydoops has been collected and issue #6 was recently released, scripted by C.J. Julian who also co-wrote the story with McShane. Kevin McShane will be attending SPX this weekend, so you should find him and grab this wonderful book that should already be in your hands!

And tell him Kistler sent ya!

Alan “Sizzler” Kistler actually auditioned for the role of Dr. Manhattan but was then informed that he really should have been wearing pants. He has been recognized by Warner Bros. Pictures and mainstream media outlets such as the New York Daily News as a comic book historian, and can be seen in the “Special Features” sections of the Adventures of Aquaman and Justice League: New Frontier DVDs. His personal website can be found at: http://KistlerUniverse.com. One of these days he’d love to write for DC, Marvel or Doctor Who.