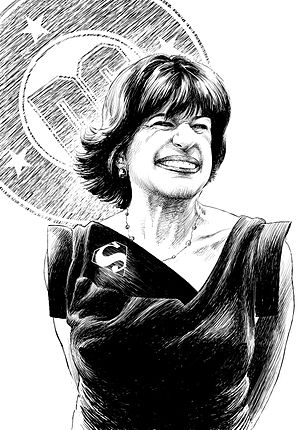 Please read the last two week’s installments before reading this. Thanks!

What has gone before, quick and dirty recap… I’d sold (in my opinion) the second greatest idea in the history of comics to one of the greatest publishers in the business. It was to be written by one of the greatest writers (Dwayne McDuffie) with art by a guy (me) who was going to make sure this time he got it right.

All was right in the world. Except for one teensy little problem. The editor assigned to the project wanted to change one thing…

A few days after Jenette Kahn assigned the editor, Dwayne went to meet with him to map out the production schedule.  I was living in Los Angeles and the meeting was in the New York offices of DC. There really was no reason for me to be there. After the meeting Dwayne would call and fill me in.

I couldn’t wait for that call. In hindsight, yes, yes I could have.

When Dwayne called me he came right to the point, as always. “Penis Head wants to do the project but without you.”

Aside to Dick. If, by chance, you are reading this, feel free to keep avoiding me whenever we happen to be at the same industry event. That’s a wise choice. Really.

Dick no longer works at DC. I have no idea where he works now. The last time I saw him he was trying to get into my party at last year’s San Diego ComicCon yet somehow his name wasn’t on the guest list…imagine that.

Dwayne’s meeting was not a production meeting it. It was a get rid of Michael Davis meeting.

“This is a great project, but I don’t want Michael Davis on it,” said Dick.

Days before Dwayne made that call I was quite literally the happiest I’ve ever been regarding a deal. Project X was my dream project and 30 seconds after Dwayne called me I was the unhappiest I’d ever been over a deal.

But, maybe just maybe all was not lost…

I started talking as fast as I could, hoping I could make a case that Dwayne could take back to Dick.

“What if I did samples?”

“What if I worked from someone’s layouts?”

“What if I was not paid until all the art was approved?”

I tried to keep talking, afraid if I stopped the little hope I still had of my dream coming true would vanish.  Finally, I stopped and my fear became a reality. Dwayne said softly, “He made it quite clear, this project would not happen with Michael Davis.”

How could a project I created go on without me? Simple. The company buys you out… but there was no way in hell that was going to happen.

I felt like crying and that made me mad.

I’m much better now, but there was a time when getting my dander up was a real issue. I was about to go off but before I did Dwayne said; “I told him that it was your idea and I wasn’t going to do it without you.”

Just like that my anger was gone but I did still cry but not because I was angry but because I had a great friend.

My deal was dead and I felt horrible. Then I didn’t.

If there are any aspiring young creators out there the following you should pay very close attention to. If you have read the two previous installments you know that Project X was green lit by the then head of DC Comics, Jenette Kahn.

Why didn’t I just pick up the phone and call Jenette? She was in charge, she green lit the project and she and I were friends so why not just call her and throw Dick under the bus?

Because this is not high school.

This is the real world and not the Real World you see on MTV. That Real World you see on TV is just bullshit. It’s nowhere near real. It’s a TV show. No reality show is even close to being real. Do you think for one moment you would act the same if cameras were documenting your ever move?

In the real world of corporate America you do not, I repeat you do not cry like a little bitch and go running to mommy. As much as I wanted to do Project X, I loved and respected Jenette and I could not put her in a situation where she would have to second-guess or overrule a member of her staff.

Jenette may have sided with me or sided with the editor. Either way it puts her in an atrocious position and if the project was saved at what cost would that be? Would the editor make my life a living hell? Would nothing I did be good enough?

The ways an editor can make your life unbearable are countless. Now imagine if that editor had a personal axe to grind because you outed them to their boss.

Also If Jenette sided with the editor and decided I was off the book then it’s a double kick to my throat.

Young people — and I say this in all seriousness — no matter how good you may be at your craft, understand that means absolutely nothing if you are not smart with regards to how you conduct yourself professionally. DC Comics was and is a business; their side job may be to make dreams come true but business always come first in any organization.

Project X was dead at DC. That was clear. After I hung up with Dwayne, I sat for an hour or so thinking up alibis while putting together my planed revenge. Then I realized with a smile that the best revenge is living well and showing your naysayers that they were wrong.

I called Mike Richardson, head of Dark Horse and set a meeting for the next day.

The next day I pitched Mike Project X .He brought it and just like that, I’m backkkkkkkkk….

Except for one teensy little problem…

Next week: The conclusion!