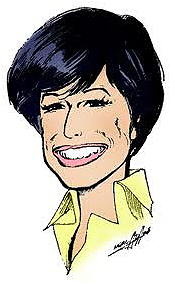 Please read last week’s installment before reading this. Thanks!

What has gone before – the quick and dirty recap. 1999: I pitched and sold what I consider the greatest idea I’ve ever come up with to DC Comics. Before I pitched the idea I checked with three of the best writers in the industry, Keith Giffen, Lovern Kindzieski and David Quinn. They all thought it was a great idea. Keith Giffen called it one of the greatest ideas he’s ever heard.

After hearing praise from those guys I ran the idea pass Dwayne McDuffie. Dwayne liked the idea so much he said he wanted to write it. It was with that in mind I pitched the idea to Jenette Kahn who was running DC Comics at the time.

Jenette loved idea and said “Let’s do it.”

From the moment I met Jenette, I liked her. I’m glad to say she liked me also. We hit it off right away. We talked about anything and everything. One day, Jenette and I were talking about fine artists and she asked me if I knew the work of William T. Williams. I did. In fact, I knew his work so well Jenette was impressed. I knew more about his work than Jenette and at one point she remarked that I must be a huge fan. “I’d better be.” I told Jenette. He’s my cousin.”

Jenette said she would like to meet him so right then and there I made a call and in a few days Jenette was being given a studio tour by my cousin. In my entire life I’ve only asked my cousin to give two people personal studio tours. Jenette was one of them.

That’s a big deal because my cousin is a huge artist.

He’s in the Janson History Of Art, the definitive book on art history.

My cousin is my mentor and my surrogate father. He and my mother quite literally saved my life while I was growing up. I’m fiercely protective of my cousin. Every mofo with a serious bank account asks me to hook them up once they find out William T. Williams is my cousin.

He’s too important as an artist and as my family for me to make a call on anyone’s behalf just because they can drop a million bucks or more (yes, you read that right) on some art. So I’ve only made that call twice and Jenette was one of them.

Some years before that, Jenette and I had talked about me coming to DC as the first black editor. As cool as I thought that was I couldn’t do it. Frankly, I couldn’t afford the pay cut. What I did do was make a list of some people whom I thought would be great choices. Jenette thanked me for thinking of that and actually someone from that list was hired. No, I didn’t get them the job nor do I know if anything I said had anything to do with him getting the job. What mattered to be was DC comics had a black editor.

I tell you the history with Jenette and I because of the importance of what happened to the project I sold to DC. The project I considered the greatest idea I’ve ever had.

Project X was green lit by Jenette and assigned to an editor at DC.

Me not being an idiot, asked Dwayne McDuffie to write it based on my overview and I was to handle the art. Dwayne said yes and I was doubly excited. The editor chosen, loved the idea, and couldn’t wait to do it.

Neither of those projects were my finest hour.

Although, believe it or not I still get fan mail from France on ETC. Two months ago I received an email from a comic club in France asking if I was coming to France in the future. I just so happen to be going to France this September on some business and the club asked if they could take me to dinner and talk to me about ETC.

Damn. The French must do a lot of meth… and coke… together.

Back to Project X.

So don’t send me comments about how there is no way I could have come up with the greatest idea in the history of comics. As I said, I know I didn’t.

All was right in the world.

Except for one teensy little problem.

The editor wanted to change one thing…