September 8, 1966 was a pretty big night of television for fans of the fantastic. NBC ran a sneak peek of several new shows a week prior to the formal premiere of the prime time season. At 7:30, Ron Ely first swung on a vine across trees as Tarzan while an hour later, Captain James T. Kirk confronted the Salt Vampire on the first airing of Star Trek. While the latter has gone on to great international fame, the former series has always been somewhat eclipsed.

Warner Archive, bless their souls, has rectified that by releasing the complete first season of the two season series. You can find the first fifteen episodes on four discs comprising Tarzan Season One, Volume One while the remaining sixteen episodes are available in the second volume. Warner has done a nice job cleaning the prints and the show looks pretty darn good.

It was also a good time for Edgar Rice Burroughs’ immortal lord of the jungle as producer Sy Weintraub took over the film series in 1959 as Johnny Weismuller’s rein came to an end. He freshened the film franchise by restoring Lord John Greystoke’s vocabulary and found new story territory to mine. He went through two leading men before settling on little remembered Mike Henry, who was in line to bring the ape man to television but had a falling out with Weintraub over money. Handsome and fit Ron Ely, already on hand for a role in the series, was asked to take over the lead and joined the legendary line of men to bring Tarzan to life.

In bringing over the series from film to television, several alterations were made, starting with the ejection of Jane from the series. This freed the lead to have a variety of romances, none more frequent than with Julie Harris, making numerous appearances as missionary Charity Jones (including a fun two-parter in season two). Holdovers from the film series included Manuel Padilla as the requisite kid sidekick, Jai, with Cheetah for animal humor.

The stories had to be inventive while being cost effective, with effects easily produced in Brazil where the show was initially filmed. As a result, there were plenty of animal issues with lions and leopards, while the ERB sense of the fantastic can be seen with the killer spiders. And what would Tarzan be without finding lost civilizations with their comely princesses? 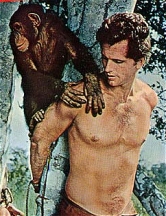 Ely was a fine, impressive physical specimen so it made sense he’d want to do his own stunts which gave the directors great flexibility in framing their shots, which helped the overall look of the series. On the other hand, he apparently was injured seventeen times during the first season alone, getting singed, bitten, ripping the flesh from his feet, fracturing three rubs, breaking one shoulder, separating the other and spraining both wrists. Talk about suffering for one’s art.

Is it great television? No, but then again, most prime time in the 1960s fails that test. On the other hand, Tarzan like so many of its genre peers of the era is tremendously entertaining to watch. It’s nice to have these back in circulation and since these are print on demand discs, you need to demand them and should to see for yourself.