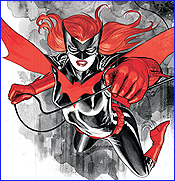 Whenever my old employer, DC Comics, reprints some of my ancient work, it’s gratifying, particularly if what’s reprinted is one of the “socially relevant” stories Neal Adams and I did in the early 70s, but it can be a little disheartening, too.

The problem is, the stories are for the most part still relevant, and what does that say about the state of the nation? Environmental upset? Yep, still got it. Racism? The folks down in Florida could tell you about that. Addiction? That lovely singer is no longer with us. Overpopulation? Hasn’t improved. American Indians? Some of the nation’s worst poverty is found on reservations that don’t house casinos.

As one of Bill Maher’s guests said on his show last week, it seems unbelievable that birth control could be a factor in presidential politics in the in the twenty first century. I mean…birth control?

But occasionally a glimmer of light shows through the gloom. So let us smile and extend a salute to Batwoman.

Digression: Batwoman and I go way, way back. Fact is, I killed her 40-something years ago. Why? Don’t remember, exactly. Her demise was almost certainly a plot point in the days when comics stories were largely plot-driven, and she must have seemed to be good cannon fodder: a character who, although she was in the continuity, hadn’t done much in a long time and if we needed a snuffee, and I guess we did, she was a good candidate. I do regret ending her offstage; she probably deserved a death scene at the very least.

End of digression: Batwoman is back. Wait – make that a Batwoman, who has the same name(s) as the original, but a different lifestyle. She’s a redhead and…oh yeah, a lesbian. Big deal? In our world, it kind of is since, from the beginning of mass-marketed comics, redheads were forbidden.

Just kidding: it’s gay people who could not grace our little sagas and in this we were one with most other media. In television and most movies, sex of any kind was antiseptic – all those cardboard kisses! – and gay sex was way outside the limits. And if gayness was an element in a story, as in some of Tennessee Williams’ film material, it was no more than hinted at and its practitioners were going to suffer plenty before the last reel.

In comics? Well, one of the characters John Byrne created for his series Alpha Flight was gay, but not too obviously; John’s editor knew of Northstar’s orientation, but I’m not sure anyone else in the editorial department did, not at first. (I’m informed that later creative teams pulled Northstar further out of the closet.) And a couple of years back, Marvel let us know that the ol’ rannie from the western titles, the Rawhide Kid, was gay, news that managed not to shake any foundations. But on the whole, the Kid and Northstar and a few others, including the revamped Question, in private did icky stuff that wasn’t mentioned, except, maybe, in he gutters.

Now, Batwoman. Last week she received a media award from the Gay & Lesbian Alliance Against Defamation and nobody’s making any secret of the recognition.

Call it one of those glimmers I mentioned earlier. And be grateful for it.