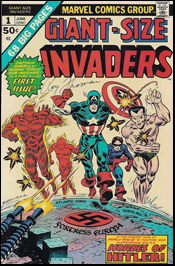 In a landmark proceeding, the American Nazi Party has sued Marvel Comics and its owner, The Disney Company, over the latter’s use of the character Adolf Hitler as well as their use of the stylized “swastika.”

The American Nazi Party is claiming trademark violation, a claim attorney Frankie Abbott perceives as “vacuous.” The renowned First Amendment and Title 35 lawyer believes both Hitler and the swastika are in the public domain. Hitler was a historical figure who ran “The Third Reich,” an alternate name for the German Empire in the early 1940s. “The use of the so-called swastika dates back over a millennium,” Abbott notes, “and has been used in Asian and Native American culture ever since.”

Nonetheless, the American Nazi Party has filed in the United States District Court, Central District of California, seeking $45 million in damages and a permanent injunction ordering a cease-and-desist on the use of their alleged trademarks, including in reprints of previously published materials. Further, the American Nazi Party seeks an additional $250 million in damages from the motion picture Captain America: The First Avenger, produced by Marvel Studios, a division of Marvel Entertainment. The Party claims contractual representation for the estate of the German Führer und Reichskanzler, and is taking these actions on their behalf.

Neither Marvel nor Disney attorneys responded to ComicMix by deadline.