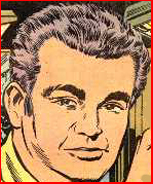 I’ve seen the future of comics.

I had a meeting yesterday with a company that is going to change the game on the net and can change for comics and creators. I’ve haven’t been this excited since I was 17 and my very first real girlfriend Yvonne Stallworth said, “My parents won’t be home until the morning.”

At 17you know what that means, right fellas?

I can’t talk about the company or what they are doing…no that’s not true, I can talk about it but I’m hedging my bets just in case I’m wrong…which, by the way, I’m not.

That way if they crash and burn I’m protected and if they succeed I’m golden!

All the above said, I’m at a lost as to what was the last game changing moment in comics.

I’m not sure because to say something is a game changer is a big deal. Because it’s such a big deal I started thinking, what does it take to be a real game changer?

This is what I came up with. Areal game changer is a person or event that creates a new way of looking at things and years later that way has become the way.

So, with my personal criteria noted what follows are what I consider the most important game change decisions or people who have done so since I’ve been reading comics. You may disagree and if so feel free to amend, add or challenge some or all of my choices.