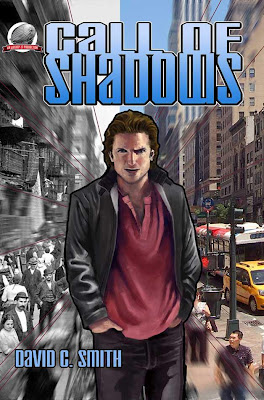 A MAN OUT OF TIME

Airship 27 Productions is proud to release its fifth book of the year; CALL OF SHADOWS, by well known fantasy adventure writer David C. Smith. Although known for its novel and anthologies starring classic and new pulp heroes from the 30s, Airship 27 Productions has occasionally ventured beyond that era umbrella.

“Every now and then, a project comes along that totally appeals to us as modern pulp,” Managing Editor Ron Fortier explained. “This was such a book. Written with all the sophistication and sensibilities of a 21st Century narrative yet capturing some of the same magic and sense of wonder the classic pulps were famous for. We’re very excited about this title.”

Restaurant owner Steve Beaudine is killed in a car accident and his beautiful wife, Ava is severely injured. After months of physical recuperation, she returns to AVA’S with the desire to keep the business going. But Tony Jasco, her husband’s partner, has plans to sell the eatery and split the profits. Ava adamantly refuses to terminate what had been Steve’s dream. She is determined to make it work no matter Jasco’s opposition.

Then the mysterious David Ehlert enters her life with a fantastic story, one straight out of a fairy tale. He claims to be a wizard and that Jasco is trying to have her killed to gain his own ends. Ava simply can’t believe such a fanciful claim…until they are attacked by magical dark forces. Suddenly she finds herself the target of a twisted, dark magician and her only salvation is Ehlert, a man claiming to have been born in 1886 but still looking young and fit.

Writer David C. Smith spins a colorful, fast paced thriller that introduces a fascinating new hero in the vein of the classic golden age pulps but with a decidedly modern day twist. It is the story of a haunted man out of time seeking redemption for past sins in a world of arcane mysteries and magiks. CALL TO SHADOWS is a masterful thriller by a veteran writer that will keep you on the edge of your chair from start to finish.

The book features a cover painted by Bryan Fowler and designed by Art Director Rob Davis with nine interior illustrations by artist Mark Saxton. Look for it at Amazon, Airship 27 Productions’ website and soon fromwww.IndyPlanet.com.

And soon at the POD store, Indy Planet.