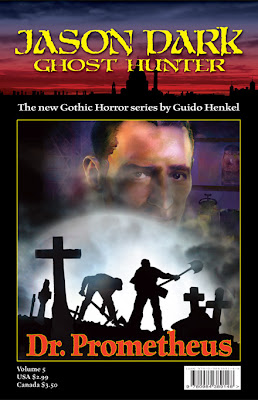 Momentum is a hard thing to keep up in any endeavor and especially hard to do so with recurring characters in series fiction.   Some authors succeed marginally well for a long time, making their central cast interesting in every new installment, filling the plot with unigue traits, and giving fans both something similar to what came before and yet in its own way totally different.  Some authors succeed, but most eventually come to a point to where the story falls apart, the rock stops rolling forward, and what results is essentially a literary train wreck.
It even happens to series where the first four books were nearly the best of their type a reader could read.
DR. PROMETHEUS, the fifth Jason Dark tale from Guido Henkel, tackles an interesting development in English history.  Due to laws passed regulating use of cadavers and how professionals acquire them, grave robbing has become quite the black market business for types who would engage in that.  And the best customer of these thieves of the dead, a doctor secluded in his own home, isolated by his own choosing- Dr. Prometheus.   Selling his soul to the Devil, it seems, Prometheus seeks to discover the secret of life, first extending it, then renewing it to the dead.  It’s this travesty against humanity that brings him into contact with Dark and his partner, Siu Lin and threatens the living of London with murder at the hands of the undead!
The premise of the story is interesting, with shades of Frankenstein being present as it opens.  As a matter of fact, the opening pages are the only satisfying parts of this tale.  Very quickly, the story descends into confusion.  There are way too many points of view being juggled, very little descriptive tissue connected to the narrative, and a complete lack of cohesion within the story.  The villain of the piece is poorly realized and his motivation even moreso.  Dark and Siu Lin seem inserted into this almost accidentally and work their way through it in a plodding manner, not typical of Henkel’s previous tales.   Even the introduction of Herbert, Dark’s oft mentioned ally, into the story doesn’t help much, but in fact only adds to the confusion due to it just being accepted and not suitably explained to possibly new readers just who Herbert is.
My biggest complaint with this story is how Henkel portrays Siu Lin.  Or more to the point, doesn’t portray her.   She’s not a major component in this fifth Dark tale, which is fine, but for what little we do see her, it seems as if she’s someone else, as if Henkel has disregarded what I took to be careful building of interest in her.  This added the biggest disappointment in a story that held little else that I found interesting.
TWO OUT OF FIVE TIPS OF THE HAT- I thoroughly enjoy the series as a whole, but this installment gives me a lot of reason to worry about what follows.
Share