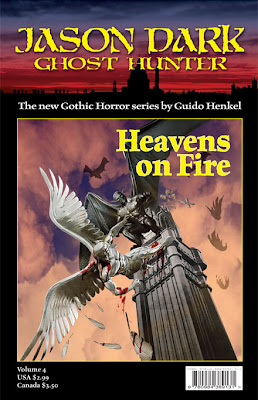 Supernatural Investigators stumble over all sorts of Monsters and Mysteries in the world of fiction.  But if you look particularly close, when you tie the word paranormal or supernatural to the word investigator, often those tales revolve around monsters we’d expect to see- Vampires, Ghosts, Furry Beasties on Two Legs, and so on.   I enjoy it when someone gets it right, though, and by right I mean when a writer realizes that by tying those words together, it opens up a whole realm of possibilities beyond Hollywood creatures and bump-in-the-nighters.

In the fourth installment of his Jason Dark series set in Victorian England, Guido Henkel leaves behind the terrestrial fear bringers and applies the term of ‘terror’ and ‘monster’ to something more ethereal, holy even.   This novella finds Dark and his wonderful partner Siu Lin literally in the middle of a war between Heaven and Hell.  The earth is being assaulted by demons who have found a portal into our world. These hellish invaders are led by a vile creature who has the ability to essentially continually manifest demons as necessary.  And his intent is not simply to destroy the world, but to quite literally bring the Heavens, and all who reside there, crashing down at his feet.

I have been continually impressed with the twists and takes Henkel applies to the entire genre he’s exploring with the Jason Dark series.   Although the battle between angels and demons has become somewhat cliche, Henkel brings a level of actual humanity to it.  There are reasons the Demon is after God and there are reasons the Angels stand in the void and those reasons on all sides are not simply black and
white, they are in fact very…human.    Couple that with the usual fast pacing, tight plotting, and bits of tension fraught throughout a Henkel book and this is a great read.

Something that struck me as off, however, was the characterization, particularly of our two main characters.  I’m not sure if its simply because Henkel has settled into the characters of Dark and Siu Lin after four volumes, but there’s something missing.  I’m fairly certain that instead of adding nuance and depth to both the individuals and the two as a team as he has in the first three volumes, Henkel has basically brought Dark and Siu as they were in the third book into this one.  That’s not necessarily a bad thing, but it does take a bit of unique vitality out of the tale that its predecessors displayed.

FOUR OUT OF FIVE TIPS OF THE HAT- Great story, fantastic pacing, and enough supernatural hijinks to satisfy any fan of paranormal escapades with a good mystery thrown in to the mix.