MARC ALAN FISHMAN: The First Comic That Mattered… To Me 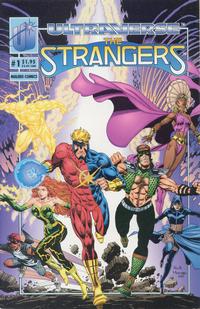 Welcome back, friends. After the hate-spew I delivered in the first few weeks, and the near love-in I had over the last two… I asked myself what was the obvious next step.

Self?
Yes, Marc?
What’s the obvious next step?
Hell if I know. I still hate Flashpoint. And about half of the DC reboot. And the X-Men. And walnuts.
Well, that’s no help.
Sorry. Why don’t you talk about Malibu?

Seems simple enough. Let me set the scene. It was 6th grade. 1993. I’d just met this crazy kid named Matt who drew better than me, and loved comics. I was insanely jealous of his talent, and unlike my other friends at the time, he wasn’t a brilliant mathematician well on his way to being our eventual class valedictorian. He invited me to a sleepover birthday party, which pretty much meant by the next week, we were hyper-awesome bestest friends.

27 days after his birthday party, he showed up at my house, in the frigid December air. He handed me a box. “Happy Birthday, dude.” Paper rips, bow is tossed to the stoop. Before my 12 year old eyes, bagged and boarded, were copies of UltraForce #1 and The Strangers #1. Matt had remembered that I’d seen the short-lived UltraForce cartoon show, and loved it. Especially the episode featuring The Strangers. Excuse me for a second… I need to go wipe my eyes. It’s dusty down here. Dusty!

Suffice to say, I read those two books near instantaneously. And then reread them. Looked over every nook and cranny, too. Something about these books spoke to me in a way no other sequential literature had.

Flashback to 4th grade, when I’d purchased a handful of X-Men Adventures cartoon-knock-off comics from the comic shop, in an attempt to “get into” the hobby. Why? A kid I thought was cool was into them. Of course, after telling him of my first purchase, he scoffed. He chortled. He guffawed, even! My selection wasn’t the “real” thing. Seems I couldn’t tell you if Cannonball was on X-Factor or X-Force, or who Domino was, or just why Deadpool needed a gun with seventeen barrels. So it goes. And with it? My desire to read comics. Until of course, Matt delivered Malibu’s Ultraverse to my door.

Unlike my aforementioned jaunt into Marvel’s back catalogs a couple years prior, the siren’s song of Malibu was calling to me. “Marc… I’m new! I’m fresh! You don’t need to know about the previous decades of material to enjoy me!” And I was sold. Comic book collecting to the uninitiated is not so easy to break into. “Real” fans love to wax poetic about their encyclopedic knowledge of every last ounce of minutiae memorized. How does a kid just jump-in to an X-Man (be they Uncanny, Forced, Factored, Astonishing, or Broasted), an Avenger (be they Secret, New, Normal, Dark, or Xtra-Tasty-Crispy), or a Justice League (be it of America, Antarctica, Detroit, Elite, Dark, Double Dark, or 78% Reserved Cacao)? Simply put? They can’t! Continuity is king to the peasants of the DCU and 616. See? Right there? I did it again!

You see kiddos, back in 6th grade, I was handed a pair of books that required nothing more than my desire to see muscled up men and bazooka breasted women do battle with sharp, pointy, and evil looking things. With Malibu, I could jump in on the ground floor to an entire universe, and begin my own private wiki from which I could dispense chortles and scoffs at those not yet inundated. An issue #1, with no pretense to it, allowed me to understand comics at their most basic level. The game started here. I didn’t need to even know the rules.

And thus began my career as a lifelong nerd. After devouring UltraForce and The Strangers, I turned to the remainder of the Malibu Universe. Mantra. Freex. Barry Windsor-Smith’s Rune. Prototype. Prime. Hardcase. And Night Man. Oh… Night Man. If it was buried in a back issue box and had Malibu’s logo on it… I owned it. I loved it. While Matt and my other friends tossed dollar after dollar into Image’s coffers, I remained the lone citizen of the Ultraverse. Keep your ratty-caped Spawn! Yearn for your over-yolked Youngblood! My universe was just starting… and rumor has it, it’s so good, Marvel is gonna buy it, and incorporate it into their universe! And when those dopes who like “Avengers” and the “X-Men” see Prime and Lord Pumpkin trading blows with the Black Knight and U.S. Agent, they’ll all come to me… cause I was there when it started, man. I had long box after long box of Malibu’s greatest hits. All because Matt started me out on a pair of their first issues.

By eighth grade, I was forced to deal with some sad conclusions. First? Matt nabbed the books from the back issue box marked “half-off.” The universe was in its death throes before I’d even plunked down my own allowance for it. I came to terms with my precious UltraForce being nothing more than knock-offs of Captain Marvel, Wolverine, Iron Man, Deadman, Jubilee and Professor X. And though it was near impossible to admit… I even dealt with the fact that my favorite superhero of all time, Atom Bob, was in fact just Firestorm.

OK, I’m lying. Atom Bob was 1000 times cooler. Especially because the immediacy of his super powers activating split his personality such that he eventually became his own nemesis. Dammit, that was awesome. And for every UltraForce, Night Man, and Mantra I’d purchased so gleefully… I was soon replacing them with Green Lantern, Iron Man: Reborn and Bloodstrke: Deathblow: Deathforce: CyberBloods.

I truly believe for every person who dares type “Comic Bbooks” into their Facebook profile under “hobbies,” there is a book or two that truly got them on their road to geekery. For some it might be an old ten-cent rag about long forgotten super-heroes. For others it might be an Alan Moore tome, rife with subtext, literary references to the 19th century, and neo-post-modern-psuedo-super-science. For the kids daring enough to put down the damned X-Box controller or iPhone, it might even be an Unshaven Comics comic, or an iPad copy of Lone Justice. In any event, I know that for all of us, it’s just one or two of those books that started the avalanche down nerd mountain.

I end today’s article not with some witty summary line carefully crafted to stamp my point… I merely welcome you all to list what issue got you into comics, below.