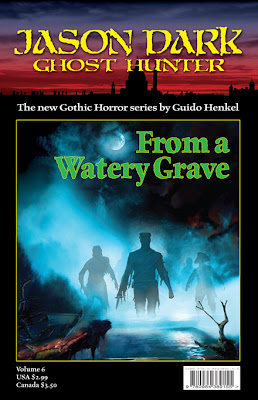 A tragic shipwreck, all hands and a horde of treasure lost a century ago off the English Coast literally returns to haunt the countryside and entice Supernatural Investigator Jason Dark and his partner Siu Lin to investigate!  Throw in another consulting detective, a rather ominous Asian crimelord, pirate ghosts, cursed gold coins, and an invisible wall of death and you have the sixth Jason Dark Adventure from Guido Henkel-FROM A WATERY GRAVE!

The midpoint of the Dark series, this sixth novella is definitely a step up from its predecessor.  It veers back toward the first four books from Henkel, shimmers with a bit of the same imagination, glistens with a hint of tight plotting and decent pacing.   The most fascinating part of this story was the care Henkel gave to the doomed crew of the sunken ship, both as they died and when they returned as ghosts.  These ‘monsters’, though there was more tragedy than terror attached to them, were wonderfully realized and intriguing, much more so than most of the human cast around them.

One of the aspects of this book, however, that was extremely laborious was the name dropping.  Henkel had, until FROM A WATERY GRAVE, rather creatively peopled the Dark stories with hints and glimpses of famous historic and literary characters, particularly a handful associated with London’s best known Consulting Detective from the Victorian Era.  In FROM A WATERY GRAVE, however, the subtlety that Henkel wielded so masterfully in the earlier tales is completely gone and some of the references and inclusions of famous characters are ham handed and seem to be inserted simply for effect.  One completely makes no sense at all and adds nothing to the story.    I am definitely a fan of tales that ‘cross over’ characters from other works, but I had become such a fan of Henkel’s silken approach to it in previous books that the way it was handled in this one disappointed me.

THREE OUT OF FIVE TIPS OF THE HAT- There’s a progression back toward the greatness that Dark 1-4 possessed and I truly hope later volumes return to that with gusto!