HANCOCK TIPS HIS HAT TO ‘THE GHOST SQUAD’! 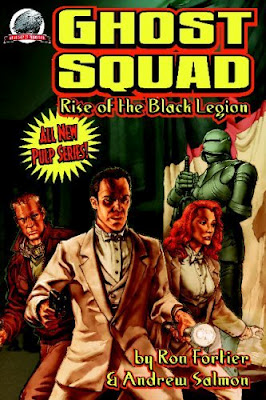 Even though Pulp, both Classic and New, runs rampant over a myriad of genres, there’s no doubt that a personal favorite of mine and indeed of many Pulp fans of all shades and types is the tried and true Hero Pulp.  A strong central ‘lead’ character surrounded by able bodied, skilled, and interesting teammates off on an adventure against over the top villains with a larger than life plan to take over some corner, or pray tell  even the entire world.   There’s just something about those stories that endear themselves to me and to Pulp Fans as a whole.

I really enjoy it when I find such characters in a New Pulp work, one that effectively tips its fedora to what came before, but also brings enough modern sensibility and nuance to the Hero genre to make it stand out, to make it more New than Rehash.

That’s why I really, really enjoyed GHOST SQUAD: RISE OF THE BLACK LEGION from Airship 27 Productions.

Co-written by Ron Fortier and Andrew Salmon and originally released in 2008, GHOST SQUAD opens with a story known to many of a man once dead returned to life by Jesus Christ.  This opening segues into another introductory sequence showing the same man now working the front lines of World War One.   This unique way of setting up the central character of the team we get introduced to in later chapters quickly endears the reader to said character, who currently, in this title, is using the name John Lazarus.

The uniqueness of utilizing the biblical character adds a touch of fantastic imagination to a story that also comes replete with a two fisted pilot, a beguiling lady stage magician skilled in real magic, an elite group of Nazis led by someone nearly as long lived as Lazarus and very much his opposite number, and so much more.   GHOST SQUAD moves with a pacing in the first 12 chapters and from chapter 14 on that is top notch and would serve as a great blueprint for New Pulp writers on how to pace a Pulpy tale and utilize both rapid fire action and balance throughout.

There are times, however, when one section, one chapter, even one page of a book can threaten to derail the whole process, disengage the reader so completely that they almost don’t finish the tale.  GHOST SQUAD has just such a stumbling block.  Chapter 13, which highlights a car chase involving Hale, one of the Ghost Squad members, and a very special guest star from the era of the Classic Pulps through the city of San Francisco, is a complete waste of time.   Well, not the whole thing necessarily, but the chapter, 23 pages in length, drags on after about the tenth page and carries the heroes and villains through a series of twists and turns that, although possibly intended to add tension and excitement to the story as a whole, does just the opposite and weighs the story down so much that it made it hard to stay invested in the tale.   Fortunately for the book and for me as the reader, Salmon and Fortier return to the dead on pacing and storytelling they exhibited in the first 12 chapters with Chapter 14 and do not let up or fall back into that Chapter 13 trap again at all.

Although the cover to this book isn’t typically what I enjoy stylistically, Hardin’s work fits this piece extremely well and the image cast by the cover works perfectly.  Add in Davis’ top of the line interiors, some of his best New Pulp work I’ve seen to date, along with his equally excellent design work on the package as a whole, and GHOST SQUAD definitely stands as one of the best looking New Pulp offerings out there.

FOUR OUT OF FIVE TIPS OF HANCOCK’S HAT- This book came out in 2008.   Far too long since Lazarus and crew have seen light, if you ask me.