THE PHANTOM UP FOR GRABS! 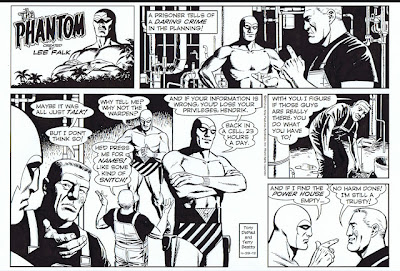 Terry Beatty, artist of the Phantom Sunday newspaper strips is offering some of his Phantom artwork for sale in order to raise the funds to replace the computer he uses to digitally pencil, letter and color the strip.

From Terry’s blog:
The process here is that I print the pencils (done in Manga Studio) in blue (a 50% cyan usually), along with the lettering and borders in black, on 11 x 17 bristol board, and then ink the art traditionally by hand with brush and pen. Some of the blue “pencil” lines can show through — but it’s usually rather subtle and doesn’t detract from the art at all. 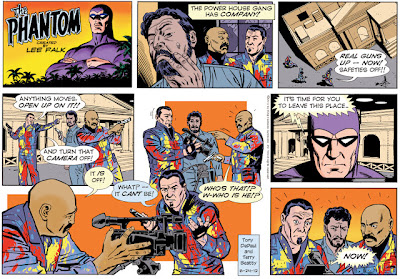 This is then scanned for color, which is done in Photoshop. In some cases, repeat panels are digital printouts as well — and the logo panel is always printed — the modern equivalent of a “paste-up” — but without the eventual rubber cement stains or faded photostat! Sound effects lettering — and once in a while, some of the more mechanical background lines, are digital as well.

As an incentive to buy now, I’m going to include with each Phantom page purchased, a randomly chosen page of original artwork from my files of comic book pages inked by me. I’ll also toss in a few surprise extras just to sweeten the deal. Prices include shipping in the US — overseas shipping will have to be calculated and added in, as that can add up a little too much. I’m also dropping some of the prices a little from the prices I’ve had on these at comic book shows.

Art here is all from Sunday strips that have seen print, starting with the first page from the current Power House gang story (sorry, all but one “Shadows of Rune Noble” pages are gone — and I’m keeping that one). I do have pages that have not seen print yet — but can’t show them publicly, for the obvious reason. 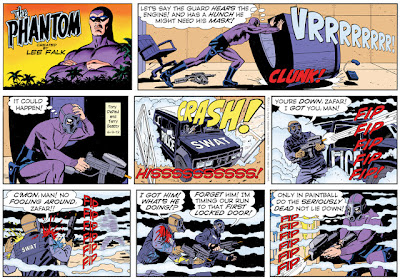 Check out the pages and prices at http://terrybeatty.blogspot.com/2012/06/original-phantom-art-up-for-grabs.html