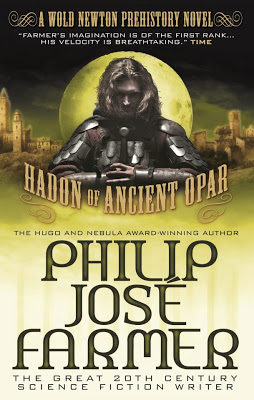 Titan Books continues to re-release the Philip Jose Farmer library in January with the release of Hadon of Ancient Opar, the first of the Khokarsa Series chronicling Wold Newton’s Prehistory. Look for this title to be available in paperback and ebook on January 15th.

About Hadon of Ancient Opar:
Twelve thousand years ago the great lost city of Opar was in its prime, with its Atlantean tradition, its fabled jewels, its living goddess and Hadon, son of ancient Opar, whose claim to a throne launches him upon an enthralling and dangerous venture.

A brand-new edition of the classic novel.