MARTHA THOMASES: Out and Proud for Comics! 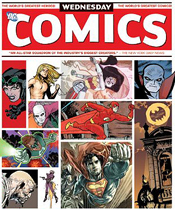 For the longest time I thought the ultimate act one could commit to drag comics out of its closet of nerdiness was to read them on the New York City subway. Unlike a bus or a train, because of the way the cars are configured, on the subway most riders face the other people. As a result, every other rider can see what you’re doing or reading – or pretending to be reading to avoid eye contact.

I loved to read comics on the subway. I especially loved to read DC’s Wednesday Comics, oversized and colorful as they were. Not only did I enjoy the stories, but I felt like I was making an ironic comment on those engrossed in their equally large New York Times or The Wall Street Journal.

Deciding what to read on the subway is a lot like deciding what to wear. New Yorkers judge each other on style, and one’s reading material is a key accessory. Several years ago, when Amazon’s Kindle was first breaking through, the Times did a feature about people who loved everything about the device except that other people couldn’t tell what they were reading.

That’s sure changed. Now, I’d guess, at least 60 percent of riders are using some kind of device, either to read or play games or listen to music. And half of the others are eating smelly food, talking loudly to their friends on the other side of the car, or applying nail polish, oblivious to any drips they get on my shoes.

Over the past several months, I’ve spent an inordinate amount of time in the waiting rooms of hospitals and doctors’ offices. If you want to be out and proud about your comics habit, read them there.

Admittedly, people in these situations are not concerned about showing off their highfalutin’ tastes. I’ve seen no one reading Proust. Still, with my gray hair and knitting bag, I’m not exactly the person you expect to see reading four-color pamphlets.

And yet, comics are the perfect thing to read. You can finish one in less than 20 minutes, which is handy if the doctors are running late and you don’t know how long you’ll be waiting. If you’re anxious (and you probably are), an inability to concentrate is not a problem. Going back to find that plot-point you missed is easy. There is something I find soothing about watching unrealistically drawn people beat each other up. You are unlikely to come across a story that reminds you of your personal situation, and therefore you are even less likely to have to consider the less attractive aspects of human mortality.

While I enjoy the fictional violence, and don’t care who knows it, I find myself oddly self-conscious about sexual content. I love The Boys, but there is a lot of (hilarious) nudity in that book. It’s not something I feel comfortable accidentally exposing to other people waiting. They might not share my sense of humor. They probably have other things on their minds.

In any case, it’s easy to fold back the cover and be discreet.