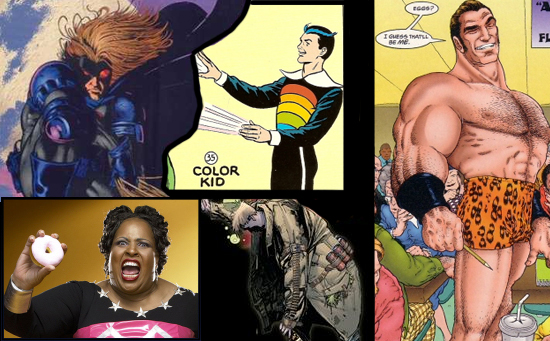 So, you want to be a superhero? Not a problem. Oh… you’re not a billionaire orphan with years to dedicate to the martial arts? Don’t fret! I’m sure you can play in a lake of toxic ooze, or get bit by a genetically unstable super-wombat, right? Well… even if you don’t have powers, don’t feel bad. Cause there are some folks out there in comic-book-land that would have been better off as bartenders or stock-boys than crime-fighters or super-heroes. Don’t believe me? Well kind citizen, scope this list of lameoids out, and see sometimes it’s no so bad being normal after all*.

Night Man – Johnny Domino was just your run-of-the-mill jazz musician with those totally hip round sunglasses (Superboy anyone?) and that always fashionable accessory… the dangely cross earring in one ear! Too cool for school you say? Well, without warning, an alien bolt of lightening hit a cable car, which in turn hit Johnny’s convertible, and a piece of shrapnel wound up in his head. Talk about a crappy Monday! Well, lucky for Domino, the shrapnel caused him to gain super human abilities! These powers combined with a kevlar vest and a grappling gun allowed Domino to take to the night and don a name shared by his underpaid jelly doughnut eating brothers-in-arms! Johnny Domino is the man who need not sleep… He is the man who can sorta hear your dirty thoughts… He’s the man who doesn’t need night vision goggles to see in the night. Johnny Domino is Night Man!

Mr. Brownstone – That’s right kiddos… Not everyone gets a superpower and decides to become a hero. Sometimes they decide to become a minor villain! Garrison Klum was born one of those despicable mutants you’ve heard of. When puberty hit, did Klum gain eye lasers capable of destroying mountains? No. Did he gain a flexible metallic shell allowing him to become invulnerable and superhumanly strong? Nuh-uh. Did he gain the power to teleport? Yes! But… not himself mind you. Garrison only gained the mutant ability to teleport small amounts of liquid! Now, give the guy some credit… he renamed himself after a slang term for heroin, and teleported a few ounces of the good stuff right into Spider-man’s heart! Sure he ended dying from his own teleporting brother literally teleporting inside him and exploding out of him (ew.)… But give him credit. The world gave him a lemon of a power, and hey, he made lemonade.

Color Kid – The Queer Eye Guys would kill to have ole’ Ulu
Vakk on their team. Why Carson Kresely would just die if he was hit by
a beam of multi-colored light from another dimension allowing him the
ability to change the color of objects at will! You can’t make this up,
kids. Yes, thanks to the DC Continuity of Crazy Color Based Powers …
this yutz manages to always be useful. Change that kryptonite to
purple? No problem! Make that sky green and the ground blue? Whatta’
distraction! Making my couch finally match my curtains? That would be a power to see my friends.

Fat Momma
–  When Nell Wilson ate a mystical donut she gained miraculous powers!
Despite her girth, Fat Momma can fly… but don’t let that fool you.
Flight aside, Fat Momma has the power to become fatter (when she
declares “Put on the weight!”), and with three pounds of her chubby
fists on her mighty stomach, she can emit “The Fat Clap!”– emitting a
strong sonic force knocking down her enemies! But you may ask… what
happens when Fat Momma eats too much? She emits “the Super-Burp”.
Folks, I’m not making this up. This is an actual reality show winner
whose concept got turned into a comic book. So, somewhere on Earth 39.5
in the bleed, you can find an alternate earth where this hero resides.
Oh, and in case you’re wondering… her arch-nemesis is named ‘Skinny
Beyotch’. And her super-weakness? Diet food. Look it up kids… I’m not
lying.

Flex Mentallo – In direct opposition to Fat Momma
comes a Grant Morrison creation this side of the meta line. Bullied at
the beach too much, Flex was granted ‘reality-altering muscles’ from a
guy with a TV for a head. According to the wikipedia… “As The Man of
Muscle Mystery, Flex Mentallo’s powers are apparently vast but
ill-defined. In a general sense, Flex can affect reality by flexing his
muscles, in a reverse form of mind over matter. In the most extreme
exertion of his power, he was able to transform the Pentagon into a
circular building for a brief moment. When Flex uses his power, his
“Hero Halo”, a shimmering projection of the words “Hero of the Beach”,
appears above his head.” Sure… I’d like to lose my gut, and have a
killer body… But sorry, Grant… this is one power perhaps better
left in that freaky maze of a subconscious you got there.

Last but certainly not least I give you Seth Green’s ubermench… The Intoxicator!
Elwood Johns was hit (alongside several other college freshmen) by an
exploding Ax-Cell-Erator… granting him the ability to share his
inebriation with all those who smell his super-powered emissions. By
emissions of course I mean burps. Super-burps… with the power to
intoxicate all those who smelt it! This is so long as Johns himself is
liquored up. Or high. Or on acid. Or shrooms. Or Ex. Take that, Fat
Momma! With a valid license and a trip to the beer barn (or any frat
party at Arizona State) The Intoxicator is there to help bring that
party vibe to everyone… whether they like it or not.

So, you see folks, it’s not that bad to be normal!

*Of
course having a few billion to travel the world and become a peak-level
human being would allow me to be just like Batman. And Batman is
awesome. Sure he can’t change colors at will, and if he wants night
vision he can only use his cowl’s in-eye-piece electronic system…
Hey… you know what? If I were any of the morts above, I’d consider
taking the 17 years and 2 billion dollars it’d take to just be Batman
instead. Now, where’d I put my mystical donut…