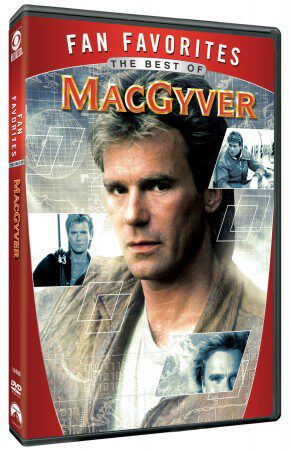 CBS Home Entertainment this week released seven Best of samplers from their library after letting the fans pick which episodes should be included. On Monday and Tuesday we looked at the six sitcoms but since the last one was a one-hour action show, we set that one aside.

Since its debut in 1985, MacGyver has been a fondly recalled series for both its inventiveness and for its appealing lead acting, Richard Dean Anderson. What’s interesting is that a cocreator for this was Henry Winkler who, 20 years earlier, became a smash success on Happy Days, also a part of the set. The show was popular enough to make through the 1991-1992 season and the lead’s ability to take common place elements to get out of tricky situations was popular enough to be parodied elsewhere.

The premise had Anderson play Angus MacGyver a secret agent, employed by the Phoenix Foundation in Los Angeles. Prior to that, in time we learn he was a scientist trained as a Bomb Team Technician in Vietnam and also worked for the federal government’s Department of External Services. His resourcefulness comes from his training and dislike for firearms. The series may well have been the best advertisement for the versatility of duct tape and the spark that made it an everyday item. Between that and his Swiss Army knife, there was little he could not accomplish. 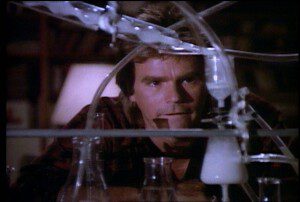 Real life scientists praised the show’s reliance on real facts and information, letting it be a recruitment tool for future engineers. The solutions to the weekly dilemmas, we were assured, were all plausible or at least plausible enough to get some press from the scientific community. Similarly, after fairly generic but entertaining stories the first three seasons, the show began tackling weightier real world subjects in its later seasons.

We have five episodes here, including a two-parter and interestingly, of the seven sets, this is the only one not to have a first season installment (a shame since Britain’s Terry Nation cowrote several of these). Instead, we open with “Phoenix Under Siege” from season two which quickly relies on MacGyver’s bomb training as a woman tries to blow up the Phoenix Foundation, endangering the staff and Grandpa Harry. 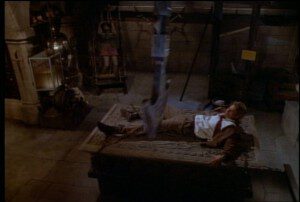 I never warmed up to the show, feeling it a little too gimmicky and not character-driven enough but clearly I should have stuck around because now I have seen later episodes and realize I missed out on some fun television. I got plenty of character in “The Widowmaker” as MacGyver grieved for his departed gal pal Mike Forester. In “Halloween Knights”, he assists Murdoc in finding Ashton, his sister. And the two-parter that kicked off season five, “Legend of the Holy Rose” demonstrate how the producers knew how to raise the stakes and threaten the world.

If you’ve only heard about MacGyver or MacGyverisms, now you have a good opportunity to see what it is you missed. Not the world’s greatest television, but more than serviceable and entertaining.