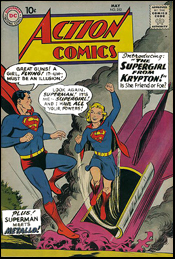 …with thanks to Martha Thomases!

I could walk, run, ride a bike, and ride a horse. She could fly.

I was always getting numerous cuts and scrapes and bruises. She was invulnerable.

I had 20-20 vision. She had X-ray vision, telescopic vision and heat vision.

I would get in trouble for not hearing my mom or dad calling for me to come in and eat supper. She had super-hearing.

I was fast. She could break through the time barrier.

I got kicked out of Girl Scouts (remind me to tell you why – it’s not what you think). She joined the Legion of Super-Heroes.

My mom gave me money to go rent a horse for an hour so I could ride. She had her very own horse. Okay, he was actually a handsome man from another planet, but let’s not get Freudian here, okay?

I didn’t have a dog. I really wanted a dog. My parents said no. Okay, she had a cat. Not a fan of cats. Why couldn’t she have a dog?

I wasn’t Superman’s cousin. She was.

If Superman got in trouble, I couldn’t do a damn thing to help him.

She was his secret weapon. Which meant that he depended on her to pull his green-glowing ass out of the Kryptonite frying pan time and again.

A long time ago – 150,000 years ago – in another galaxy far, far way, she fulfilled her destiny and led the rag-tag fleet led by the Battlestar Galactica – all that was left of the human race after its destruction by the Cylons – to a new beginning on a new Earth.

Not that long ago – 1992 – in still another galaxy far, far away, an apt description of California to some – a fifteen year old girl who lived in Los Angeles met her destiny while sucking on a lollipop on the steps of her high school. Soon after she burned down her high school gym. Her parents divorced and she and her mom moved to Sunnydale to start over.

Only Buffy couldn’t start over.

For “in every generation, there is a chosen one. She alone will stand against the vampires the demons and the forces of darkness. She is the slayer.”

For seven years, Buffy took on the natural and the supernatural, the unworldly and the all-too-real world, took on and stood up to and faced it all.

The divorce of her parents.

She cried. She fought. She survived.

And she went to the mall.