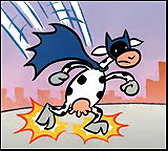 There are two totally unrelated things I want to talk about this week. Well, not entirely unrelated. Both have actual connections to comics, something my last column managed to completely miss.

1. In a move that reminds absolutely everyone of Dick Tracy, Apple may be developing the twenty-first century version of the two-way wrist radio. This would be a flexible all-class device that one would wear on the wrist. There is speculation the screen would be 1.5 inches in diameter.

I hate this idea. I can barely type on the keyboard of my phone with two thumbs. There is no way I could tap out anything even vaguely intelligible on my wrist with one hand.  There is only a slightly larger chance that I would be able to read anything on a screen that small, so I guess that would limit the amount to typing I would need to do.

There is apparently an entire department at Apple that is developing wearable computers. The article alludes to the possibility of Apple sunglasses as well.

My first reaction was to get excited, because I would look much cooler in sunglasses, and also, Neuromancer. However, the more I think about it, the more I think it’s either a bad idea, or requires more refinement. I mean, it’s difficult enough to walk a city sidewalk now, when the multitudes are so engrossed with looking at their phones that they walk into traffic. And they have to actually take their phones out of their pockets and hold them in their hands to look at those screens. With glasses, even that little bit of effort is superfluous. As you walk down the sidewalk (or, God forbid, drive your car) you won’t be able to tell who is or isn’t paying attention.

At least, with a watch, there’s the possibility of fighting crime.

2). Those of you who keep track of my every utterance may remember how appalled I was last year when the editorial brain trust at DC Comics decided that super-powered female lizards have breasts

http://www.comicmix.com//columns/2012/03/23/martha-thomases-what-would-women-worldkillers-wear/. For one thing, I kept formulating a joke in my head (“Like tits on a lizard, these are the Days of Our Lives“) that no one would understand anymore.

But, mostly, it upsets me that purportedly adult humans either know nothing about human biology or think the customers who pay their salaries are stupid tools who are easily manipulated. Both of these alternatives fill me with despair.

And this week, as I read my DC Comics, I was let down in exactly this way by a few books I normally enjoy.

The first was the end of the “Rot World” storyline, taking place in the #17 issues of Animal Man and Swamp Thing. Our title heroes and their allies are fighting creatures who have been overtaken by The Rot, so that they are desiccated zombies or monsters. Among the zombies are Superman and Wonder Woman. They are skeletal, except for Superman’s enormous muscles, and Wonder Woman’s muscular arms and giant breasts.

It makes no sense whatsoever for Wonder Woman to have a body that indicates she has no fat, but the gigantic breasts belie that. I suppose it’s possible that her breasts are full of pus, which would be scary, but also disturbing.

And then, in Dial H for Hero #9, the woman with a dial turns into a Minotaura, a female minotaur. She is covered with hair, has horns on her head, again with the exaggerated musculature, and again with ginormous boobies.

Think about it. A minotaur, half man and half bull. The female version would be half woman, half cow. No horns. And, if mammary glands, just as likely to be an udder as breasts.

Consider the possibilities of the super-powered udder. There could be jet-propelled milk, used to knock opponents off balance. A full udder is heavy, and an empty one could be flexible. It would be awesome.

But it wouldn’t give the fanboys boners, so I guess it’s not to be.

I await the Apple computer that gets built into bras.