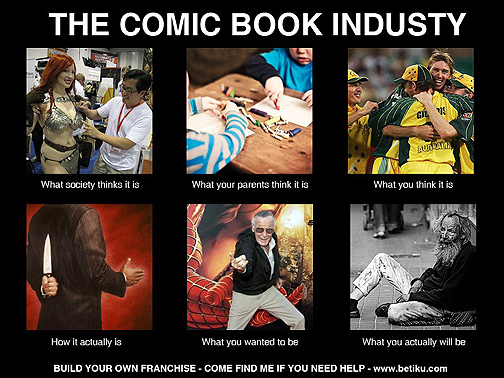 Please take a moment to look at the graphic that accompanies this article. Chances are you seen it before on the net or right here on ComicMix when Glenn posted it a few days ago.

I came across this on Facebook and I must admit I was mad as shit when I read it. I was even madder when I saw it was a marketing ploy. Don’t get me wrong. It’s a great marketing ploy and I freely admit that shit.

I went to the website and the Facebook page of the person who put it up. After reading some of the stuff on the Facebook page I was disappointed that I was so upset. Why? Because this is the sort of person I should like. We share a great many thing with regards to politics and he seems like a great guy.

I also know you do not do any of that shit with fear.

That shit is on you.

Are there barriers to entry?

If you want to work in comics, you go to comic book conventions to learn the industry not to hang out with your 20 friends in one hotel room with the sole intention of going to the Twilight panel to kiss the ass of the movie company so they will give you a glimpse of that bullshit movie which is the same movie as the previous 15 but “this time it’s personal.”

Yeah, I called the Twilight movies bullshit. That’s my opinion.

I don’t have to love a thing to respect a thing and I respect the shit out of the Twilight franchise. When it comes to how they run that shit I’m Team Edward all the way.

Instead of going to a portfolio review or a small press panel the young creators who will fall for that “call me” ploy from the comic industry poster spend their time trying to catch a glimpse of Jim Lee at the DC Comics panel. Jim is not there to talk to you about getting into DC he’s there to sell you the books you are already buying.

So, how does any of the above help your career?

The graphic depicts the comic book industry as an industry of people who will try and stab you in the back. Really? You think Jim Lee wants to stab you in the back so he can steal your idea? That great idea that you drew with a ballpoint pen, inked with a magic marker, colored with Photoshop 0.1 in tones of nothing but blue?

You know why Jim Lee does not want your great idea, which all your family and friends have convinced you will be bigger than Superman?

I’ll tell you why, because if you have been reading comics and using that as your only education and attending Twilight like and not career oriented panels at comics conventions then most likely your idea is shit.

Think of what you say to that fat ass 300-pound girlfriend when she’s asking you if she looks fat in that dress.

Fat 300-pound girlfriend: Do I look fat in this dress?

You lie. You lie because you want to tap some of that fat ass. Guess what? She knows you are lying. She’s 300 pounds, dude. She would look fat in stranded in the middle of the ocean.

Secondly, your “bigger than Superman” concept was drawn with a ball point pen, inked with a magic marker, colored with Photoshop 0.1 in tones of nothing but blue and your can’t spell so your lettering sucks also.

Is the comic book industry fair?

Does some projects that suck get published?

Is there an “old boy” network at many publishers?

Are there people who don’t want you to succeed?

Welcome to Earth, motherfucker. Or more specifically, welcome to the real world of grown-up business.

In every single business on the planet there are unfair policies, projects that suck that get green lit, cliques of people who won’t let you in and people who do not want you to succeed.

Fuck that shit and fuck them.

Learn the game before you hook up with somebody who claims he can help you with your “franchise.”

Give me a fucking break. Learn to write, learn to draw. Ask Jim Lee for advice not an autograph. Stand in line to hear Marv Wolfman or Harlan Ellison talk about writing. Stop standing in line to see clips from a movie you are going to see anyway.

Comic creators like giving advice. You will be surprised to see how much you can learn from an conversation about that creators craft.  Set realistic goals for yourself. Seek criticism from people that know what they are talking about.

Here’s a hint. Make appointments with people you would like to talk to. All they can say is “no” but would not a “yes” make your day and help you?

Take classes, go to school make an effort to learn the industry.

Yes, think about your own Franchise!

Yes, build, your own Franchise!

But before you call someone to help you do something that they have not done, do the work that’s needed to achieve your goal. Yours – not someone else’s.

When you do all of that and more, when you have gotten to a place of excellence in your craft and still don’t succeed, try again and again and then again.

Frankly, if you are that good you won’t have to keep trying because you will succeed.

Anything less, anything quick, anything that does not involve the kind of commitment to your the craft is just bullshit.