HANCOCK TIPS HIS HAT TO ‘WHAT IT WAS’!

TIPPIN’ HANCOCK’S HAT- Reviews of All Things Pulp by Tommy Hancock
WHAT IT WAS
George Pelecanos
Little, Brown and Company 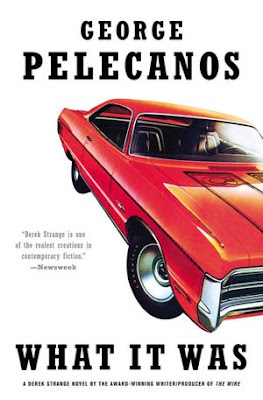 There are a few tricks to building a character that can maintain and entertain the full length of a novel.  Those and a few other skills come into play when developing a lead that will headline a series of books.   That sort of character requires layers, history, motivation, and secrets.   And best of all, handling by an author who knows when to show what cards and plays them with at just the right pace.
“What It Was” is the latest novel by George Pelecanos featuring Derek Strange, his well known former Washington DC cop turned Private Investigator.  With Strange today framing nearly the whole novel as if telling a story, Pelecanos takes the reader back to DC in 1972.  Strange has left the Police department and has recently started his private career.  He takes on a case that on the surface involves retrieving a ring stolen during the murder of a drug addict.   At the same time, Frank Vaughn, Strange’s mentor and former partner in the Department, draws the case of pursuing the murderer of the junkie, a favorite informant of Vaughn’s.  All of this is stirred by Red Fury, a mad villain who essentially starts a killing spree with the addict and has no fear of being killed, no respect for anything except his own needs, and every intent to add buckets to his growing bloody legend.
There is absolutely nothing wrong with this book if you came to it looking for Pelecanos at the top of his game.  This is a fantastic noir pulpy type crime tale, giving equal focus to the work of the men both committing crimes and those tracking them down.  The action unfolds believably and almost cinematically on a canvas that is 1972.  The attention paid to the music, the cars, the clothes, and the way people in that era paid the utmost attention to all the above, weaving them into their lives as much as the food they ate, the hearts they broke, and the people they killed.
Pelecanos wastes no time with cardboard cutouts.  From the three leads of Strange, Fury, and Vaughn, all the way down to bit parts, he fleshes out every single character, bringing flesh and blood to them with wonderfully chosen words and excellently executed turns of phrase.  Also, he stamps this story with real life.  No one gets out unscathed.  The heroes are tarnished, the villains aren’t vanquished at every turn, and yet people go on, live, and grow, wounds, scars and all.
FIVE OUT OF FIVE TIPS OF THE HAT- ‘What IT Was’ is raw, real, and unforgiving.  A fantastic piece of crime fiction.  Down, dirty, and determined.
Share