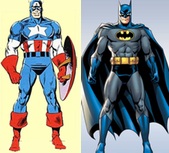 OK, honest confession time. The geek blogger extraordinaire for Chicago’s newspaper Red Eye, Elliot Serrano, posted on his Facebook page that there were three things he knew to be facts:

Now, upon seeing this – perhaps because I was in a crabby mood – I was immediately consumed with anger. I swore vengeance on Elliot. Luckily he’s of the sporting kind, and told me I was allowed to disagree with just one of those aforementioned facts. Well Mr. FancyHam? Let’s tackle this issue of one Mr. Rogers and Mr. Wayne. Submitted here for you, Elliot and my intrepid Fishmongers…. the top five reasons Batman mops the floor with Mickey’s super soldier.

I see it like this: Captain America is very skilled. In a bare-knuckle brawl against Bruce Wayne, in a ring, with no prep time, and nothing to fall back on? He’ll get in more than a few good licks. But a comic-book fight is not so cut and dry. If it were, it’d be boring. In this dream-fight, Cap and Bats would hurl everything they had at each other. After Superman and Wonder Woman drag Thor and the Hulk to the other side of the world… After Nightwing and Bucky are sucking down pity beers in a local pub over how short their run with the big-boy pants on was… After the Batmobile and Cap-Cycle are in ruin… after every last gimmick and gadget has torn Cap’s uniform into rags… After Batman resets a dislocated shoulder from one to many hits from a shield…. It comes down to two men ready to end the fight. Batman is better trained, and smarter. Captain America, even with enhanced speed and strength, is no different in Batman’s eye than any of the cadre of folks he’s bested in combat.

With a final firing of a Bat-Flare to the face (he was hiding it in his glove), dazed and confused… Batman sidesteps Cap’s haymaker, dodges the feinting jab Cap tried to sneak in, and jumps over Cap’s now clumsily executed leg sweep. After that? It’s just five quick thrusts to pressure points Stevie didn’t even know existed, and then a long nap. Broken, but not beaten… the Bat limps away in victory. And Elliot, if you’ll look under your chair, you’ll see this fight was decided before if even began. When the dust settles down, Batman is Batman. Captain America is just a patriotic drug-user.