REVIEW: Springsteen and I 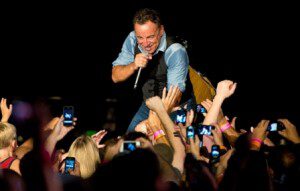 We can recall a defining moment in our lives when we encounter something different for the first time, and it connects to us in a way that feels transformative. As a comic book reader in the 1960s, the arrival of Neal Adams at DC felt like that and again, when Frank Miller ran solo on Daredevil. Other generations got that feeling encountering Alan Moore’s words for the first time; it was writing unlike anything you’ve experienced before.

In music, before my time, Elvis Presley and then the Beatles did that for the world. In 1975, when WNEW-FM broadcast one of the Bottom line concerts featuring Bruce Springsteen, I had heard nothing like it before. There was energy to music, a blend of rock and brass that was fresh. And then when Born to Run came out, the lyrics told me stories and transported me. And with that confession, it is clear I am a long time, diehard Springsteen fan.

Since his debut in the early 1970s, Springsteen has been growing from charismatic rocker to the next coming of Bob Dylan to the future of rock and roll to conscience of America. He is an artist unafraid to explore where his muse takes him, deriving inspiration from his painful youth or from a passing sign. He has sung of love and loss, disillusionment, faded youth, the struggle to put food on the table, and the promise of better days. As a result, he has put together a catalogue of material that is wide and diverse so there’s something for everyone. 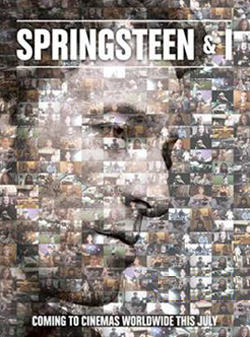 Musically, he created a unique sound fusing electric guitar, drums, keyboards and saxophone that is as equally versatile, allowing his live performances to energetically carry on for three-plus hours without sounding the same. And it’s here where he has shone, putting most touring acts to shame. Where choreography and set design triumphs over the performance elsewhere, Bruce and the E Street Band have, for decades, put on a show that can rock down a house or grow eerily silent as thousands commune at the altar of rock.

In some ways, Bruce Springsteen is a living Rorschach test as people from all ages and all countries connect with him in different ways. One summed it up best saying, “I felt like he was playing for me.” His lyrics make an instant connection with many as a song connects with where they are in life. One young graduate student has talent o driving a truck and his songs about work let her carry on. Some 2000 people shared those personal stories in a crowdsourced documentary, Springsteen and I, playing July 22 and July 30 in theaters across America. Executive producer Ridley Scott and director Baillie Walsh sifted through the tales, including one from ComiCONN producer Mitch Hallock, to assemble this 1:18 documentary. 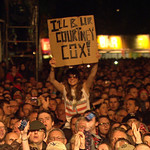 Archival concert footage is liberally sprinkled in with fan videos and personal commentaries so it’s fun to watch Bruce and band mature, age, and still have the power to bring stadiums to their feet. Many tried to sum Springsteen up in three words, the most common being “passion”. One little girl talked about “lots of effort” going into his shows which is an understatement.

There is one curmudgeon in the mix who is not a fan and endures the concerts to be kind to his fanatical girlfriend. He notes, having his songs “rammed down my throat 24/7 tends to take the edge of it” which is counterpointed with the soccer mom who plays only Bruce when she drives the kids around town.

Many anecdotes are personal, backed up with captured video of the story made real, such as the Elvis impersonator who got to perform with the Boss on stage or the girl in the Courtney Cox t-shirt loving out the fantasy by dancing on stage. JoJo recounts how he was busking on the street and coaxed Bruce to play with him and the performer agreed doing several numbers as the crowd grew around them. “He’s still one of us,” JoJo said decades later.

If the documentary is to be faulted at all is that there are no dates to place the concert footage into context. Same with some of the fan footage. While a lot of the commentary is about Bruce the singer and performer, more could have been done with connecting his lyrics to the people’s lives rather than the more generic and surface comments. And while the E Street band is prominent in the footage, the fans have little say about them, despite their contribution to concert experience.

For those wondering what the Springsteen fuss is all about, you won’t come away with a better understanding. For that, I recommend you read the recent bio, Bruce. This is a love letter to Bruce, a Valentine from the fans to one another, a global chain letter that nicely unifies the global audience of all ages.