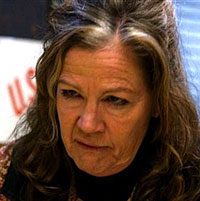 Last Tuesday night, two of my favorite series returned with new episodes – Justified on FX and White Collar on USA. Both in the same time slot, 10 PM EST. This is why TV recording equipment was created – so you no longer have to choose.

Mary and I recorded both but one we watched as it was on and the other we watched the next night. We’ll get to which one was watched “live” but first let’s talk about the shows themselves.

Is one show better than the other? Yes, but both are generally well-written, directed, and acted. And the premieres both were good examples of the two shows.

White Collar deals with a thief, con man, and rogue named Neal Caffrey (Matt Bomer) who has been sprung from prison by the FBI guy who caught him, Peter Burke (Tim DeKay) to help solve crimes. Neal’s on parole so he (usually) has to wear an ankle bracelet that allows the FBI to monitor him. The two other principle characters are Neal’s buddy, Mozzie (Willie Garson) and Peter’s wife Elizabeth (Tiffani Thiessen). Neal is not quite reformed and keeps edging towards activities that could get his parole revoked and himself sent back to the slammer. He’s not helped in staying on the straight and narrow by his buddy, Mozzie.

The show owes a lot to the movie Catch Me If You Can which had Leonardo DiCaprio as a counterfeiter and conman chased by Tom Hanks’s FBI agent. DiCaprio is also caught and eventually turned into an FBI consultant.

The show’s main strength is the bromance between the rogue and the cop. All the main characters turn in good performances. Mozzie is a delightful character and Tim DeKay does really fine turns as the FBI agent. A big plus also is the relationship between the FBI guy and his wife – they really love each other and it’s nice to see a middle-aged couple being romantically in love.

The premiere of the season picked up where the cliffhanger left us off last time. A nasty baddie has kidnapped Burke’s wife because of shenanigans that Neal, the rogue, has been doing on the side with his pal, Mozzie. And Peter, the FBI guy, knows they are responsible. Peter’s anger, fear, and sense of betrayal drive the episode as Neal and Mozzie have to work to make things right. By the end, it was very satisfying. The best show on television? No, but consistently pleasurable.

Justified. Ah, where do I start? An Elmore Leonard inspired series about a U.S. Marshall, Raylan Givens (Timothy Oliphant) sent back to Eastern Kentucky where he grew up for shooting one or two many bad guys in Miami, even if the shootings were “justified”, and he’s not happy to be home. He has an ex-wife, Winona (Natalie Zea) who is a little less ex these days, a former girlfriend Ava Crowder (Joelle Carter), a boss who’s not crazy about him (Nick Searcy) and a former co-worker in the mines, a sometimes friend and more often opponent, who has turned to the outlaw side, named Boyd Crowder played by the inimitable Walton Goggins, topping his work on The Shield.

This season also picks up after the end of the previous season which was remarkable. It had one of the best villains, male or female, I have seen on TV in the person of Mags Bennet. Margo Martindale won an Emmy for her work as she damn well should have. I was wondering if they could match that season but the first episode cleared that up for me right quick.

Raylan was shot at the end of last season and this one starts three weeks later and Raylan is still feeling the after effects. There’s a sinister crime boss from Detroit who has established himself in a memorable fashion and a sociopath for hire named Wynn Duffy (Jere Burns) who has a sadistic little game that he likes to play with his victims involving an icepick.

I don’t want to spoil things but two of the highpoints for me were when Ava makes a point with a cast iron frying pan and Raylan turns the tables on Wynn Duffy at their climatic showdown. Deeply satisfying.

The show’s writers have said that, as they approach each episode, each scene, each line they ask themselves, ‘What would Elmore do?” It shows. Leonard himself is one of the Executive Producers of the show and likes the character well enough to have his latest novel, RAYLAN, be about him.

Raylan Givens is about as cool a character as I have ever seen on TV. He means what he says and if he says he will shoot you, you’d better believe him. Both he and Neal Caffrey are charming but Raylan is definitely more dangerous. The big difference between the two shows, I think, is that White Collar could have just as easily played on network TV. In fact, the networks should be looking to USA to see how this type of show is done – the cable network has a number of good shows, such as Suits and In Plan Site that would have done well by them.

Justified would not play on network TV. There’s sex, language, and violence and they got the warning labels to prove it. All are necessary ingredients in the show and all help make the show fly.

Both shows are eminently worth watching and, in case you haven’t guessed, we watched Justified first.