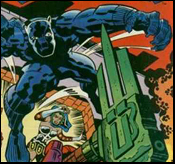 I am a black man.

Well that’s not really true. I’m a tall and unbelievably handsome black man. I work in television, mainstream books and comics. Most of the works I’ve created in all of those mediums have featured black people in foremost roles.

I create black characters because I’m a black creator and I’d like to see more black people represented in the media and I think it’s my job to…yada, yada, yada…

Over the years I’ve said a zillion times that the reason I create black characters is because I felt we were under represented and I did believe it was my responsibility to create characters so young black kids can feel themselves represented.

But is it really my responsibility to create black characters because I’m a black man now? Have we come far enough in the country and the industry for me to give up the fight?

When I was growing up there were no black superheroes of color except for the Black Panther and Luke Cage, Hero For Hire. So my two black superheroes role models were an African King and an ex-con who was a superhero only when he got paid to be.

As hard as I tried I just could not identify with The Black Panther; he was an African king in his secret identity. “Oh, that’s a wonderful black man to aspire to be like.” I’m sure some of you are thinking.

I was born in Queens and the last thing I wanted to imagine myself growing up to be was an African king. I’d seen enough Tarzan movies as a kid to know I would not look good with a bone through my nose. I mean… ugh.

What about, Luke Cage Hero For Hire?

Like I said, I grew up in Queens or to be more precise, the hood in Queens. I could not imagine being a superhero that sold his services, that as they say in the hood is ghetto.

The young Harlem mother and her child were coming home very late one evening. The bus they were on was empty except for the driver and some gang bangers who looked like they wanted to start some trouble.

She was not worried, there was a rule written in stone in the hood among gangs, mothers and kids were off limits.

The problem was these gang bangers could not read.

“Yo, (bad word starts with B) what cha lookin at?”

He rose, slowly removing a gun from his jacket.

“I said (bad word starts with B) what cha lookin at?”

She was frozen in place. She had never seen a real gun before and it was at the moment she knew this was the end of her life. She held her child close to her and said softy, “Close your eyes honey it will be OK.”

The bus stopped. Cage entered the bus. Paid his fare and stared down the thug with the gun. The woman’s face lit up as she realizes she is saved!

The woman looks at Cage, she can tell by the stern look on his face he is not kidding. “ All I have is $500 to my name!”

“Then you better tell your kid to keep his eyes closed.”

Neither The Black Panther nor Luge Cage, neither of those black heroes seemed as good as the white heroes I was so in love with. Superman, Batman, Spider-Man and the like.

Spider-Man was another orphan whose parents were shot the F up AND as a bonus he was responsible for his Uncle Ben being shot the F up. His cool ass secret identity was a high school student and he worked for a great metropolitan newspaper as a photographer.

No. I got an African king. In my mind, Tarzan (according to the movies my seven year old ass was watching) would soon rescue a white couple from a boiling pot the Black Panther had placed them in while waiting for a visit from The Fantastic Four, and I got a hero who people had to pay to protect them or in other words…

Also, Super Pimp didn’t even have a secret identity. Like I said, ghetto.

That’s what I grew up with. That’s what the African American comic book artists of my generation grew up with. It’s no wonder many of us felt it was our responsibly to create black heroes that our black kids could use as real role models, heroes that spoke to them not just in skin color but in experience.

When I was a kid a black GI Joe action figure was just a white GI. Joe painted brown. That made him black to me back then but that was not good enough for my kids when I had them.

Don’t get me wrong; I grew to love Lee and Kirby’s Black Panther. I realized just how cool it was to have an African king be his secret identity. That’s around the time I also realized those Tarzan movies were racist bullshit. Hasbro eventually came out with a black version of GI Joe that was a Black Joe. The lips, nose and even hair were modeled after black features. I still remember when I got my first real Black Joe. It was so damn cool.

As for Luke Cage, Hero for Hire?

That, in my opinion was and will always be ghetto. I mean damn, a Super Pimp? Come on! Really?

I grew up wanting and frankly needing black heroes that I could look up to and that spoke to me.

Now, there is still need for more black superheroes as there is a need for many heroes of color but is it the job of people of color to create them?

Are the characters of any creator as valid as any other creator regardless if the creator is black or white?

In other words, would Blade be even cooler if a white guy did not create him? Would Spawn be even more badass if a black creator had created him?

Can white creators create viable black characters and vice versa? It seems the answer is an easy “yes” if you look at the success of some black characters created by non-black creators. It’s a easy yes in the marketplace to be sure but how about in the industry and the homes of those black kids who grow up wanting to be Blade?

Does it matter that an white guy created Blade? Should it matter? A great white guy and my dear friend Marv Wolfman but a white guy nevertheless.

Should we even care?