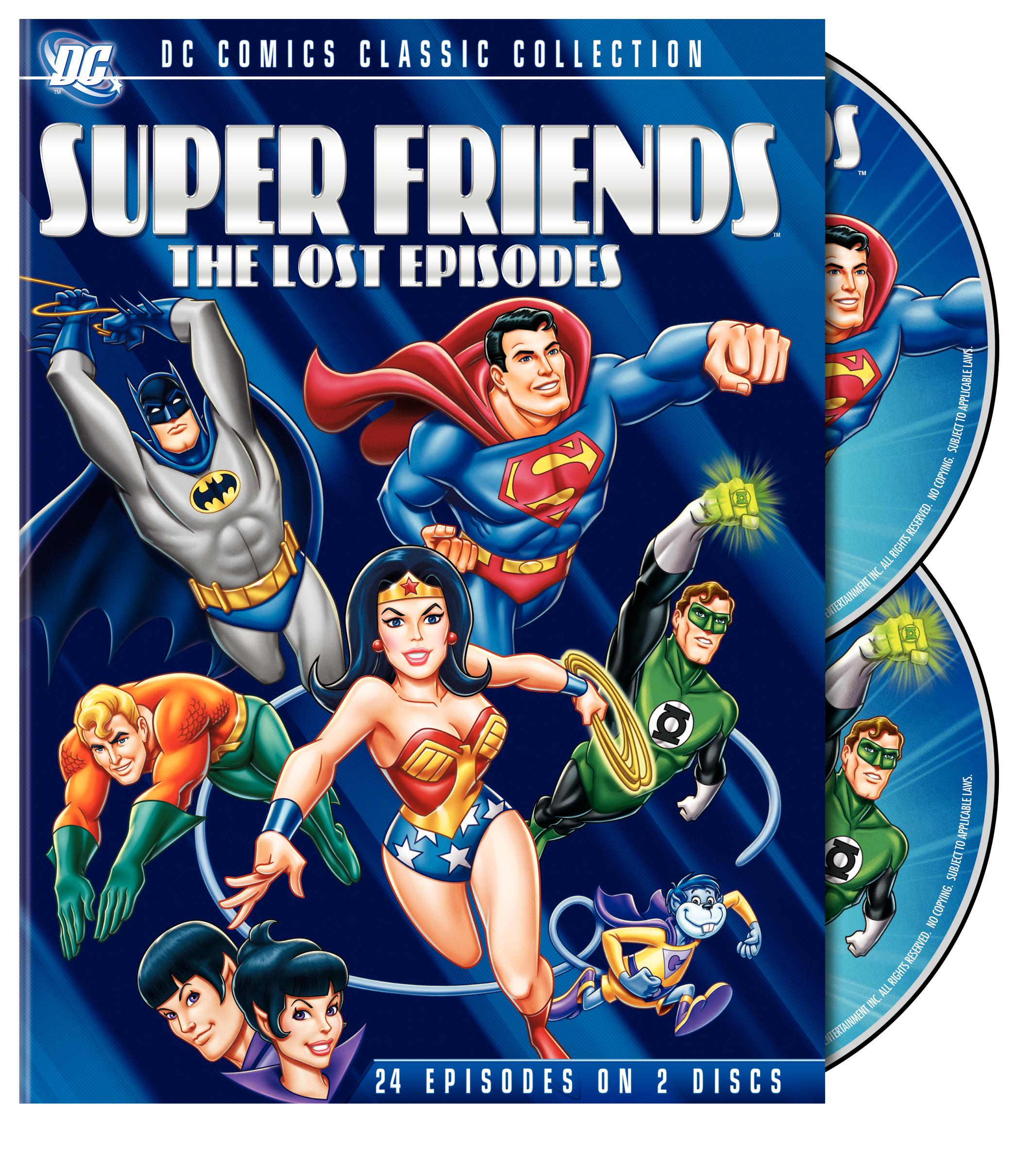 In 1973, as most super-hero series faded from Saturday morning memory, ABC introduced the Justice League of America under the more kid friendly name [[[Super Friends]]]. Until 1986 the series evolved but continued to be a network fixture with one series break, absent the 1984-1984 season.  It was at that point production company Hanna-Barbera had enough episodes stockpiled that they could offer them as a syndicated package that could be stripped, that is, run five days a week. ABC dropped the series that fateful season as opposed to being in theoretical competition with itself. H-B, though, continued to produce 24 more shorts, or eight half-hours worth of programming which aired on schedule in Australia and was later sprinkled in the [[[Superman/Batman Adventures]]], which ran on USA starting in 1995.

Now, for the first time, Warner Home Video has collected these “lost” episodes on a two-disc set, coming this Tuesday.

They could have saved themselves the trouble. At its geekiest, Super Friends put DC’s greatest heroes on display for a wider audience and kids could thrill to seeing their favorites in action. With every passing year, the format was altered so heroes and villains came and went, the concept varied and the sidekicks changed. Wendy and Marvin gave way to Zan and Jayna, aliens with their own powers. In both cases, they were added on for audience identification purposes and moronic comic relief.

By 1983, though, children’s animated fare had been bowdlerized by nervous networks and advertisers, afraid children would be incited to commit hazardous acts of violence if the adventures grew too action-packed. As a result, the heroes and villains couldn’t make much contact with one another, limiting much of the storytelling options. Apparently, internal logic, the laws of physics and characterization were also verboten.

The 24 shorts presented here display shoddy animation, poor voice casting, and horrific writing. It should be pointed out that in 1981 we got [[[Spider-Man and his Amazing Friends]]], which did a far better job in the writing department; raising the bar H-B seemed disinterested in reaching.

The wonderful Alex Toth designs for the heroes never extended to the villains or the aliens du jour so they looked silly and largely unmenacing. The H-B created ethnic heroes had powers that didn’t match their names or personalities and were a poor fit (and really, was Black Vulcan that much better a hero than Black Lightning?). At their best, these stories mixed and matched the heroes allowing no more than a few to work together in any one story. At their worst, we had Flash racing through space with nothing for his feet to touch or a spacesuit to provide him with oxygen (his protective aura works only so far). Superman seemed to find kryptonite to weaken him wherever he went and in one instance he traveled back in time and rescued his Superboy self without once explaining how that could work. Perhaps the dumbest move was when the entire JLA had a meeting and entrusted the Hall of Justice’s security to the teens.

The Legion of Doom make token appearances here and are thoroughly inept, standing around, practically begging to be captured. One adventured used Mr. Myxzptlk which was diverting but no other enemies from the comics were used, which was a real shame since many could have been substituted for the poorly conceived threats. A number of stories involved youngsters and teens showing just how stupid they could be and acting anything but like youngsters and teens.

Perhaps the best thing about the discs are the two downloadable issues of the far superior Super Friends comics. You get the first issue, from E. Nelson Bridwell and Ramona Fradon plus the 7-page story by ENB and the late, great Toth.