DENNIS O’NEIL: Santa or Scrooge or the Grinch? 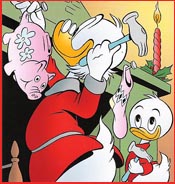 You might be chipper, content, full of good cheer – that is, you might a person who enjoys crowds and deadlines and the giving of gifts. This is your time and I say, blessings.

Or you might feel like you’re sucking a bare electric wire, stressed and frantic because your always busy life has become a nightmare of scurrying and doubt. (Will Granny like the pajamas? What to get for Aunt Bertha, a Scientologist who’s just declared herself to be a vegan? And nephew Horatio….doesn’t he already have every comic book ever published?)

One size never fits all, in holidaying as in everything else.

Well, which it is? Santa or Scrooge or the Grinch?

Let’s eliminate the Grinch from this discussion. Dr. Seuss was a national treasure, but – let’s face it – the Grinch is fantasy and was never intended to be anything else. And the jolly old elf? Okay, there’s a vaguely historical basis for him, but the guy in the red suit with the beard? Naw. Not for anyone older than eight.

Leaving us with Scrooge. Old Ebenezer is fiction (and was never intended to be anything else) but his is a fiction rooted in some truth. Haven’t we known a Scrooge or two? Haven’t we been a Scrooge? Show of hands, please.

I’ve just put mine down.

Oh, I can, and have, justified my Scrooge attacks with sweet reason. Isn’t Christmas really a pagan holiday, a celebration of the end of winter and the coming of spring, with its brightness and warmth? An occasion for rest and renewal? Perhaps a way to reassure ourselves that, despite the darkness, we will survive? And hasn’t it morphed into something the opposite of what it once was, a festival, not of light, but of greed and showing off for the neighbors? The season of frayed nerves and bereft bank accounts? Of terror at the arrival of the Master Card envelope?

Yeah, afraid so. But we Scrooges – in the hush of our chambers, at three in the morning, we know the real reason for our sourness, don’t we?

When one’s life is flaking apart, for whatever reason, displays of cheer and the sound of song exacerbate the anguish. So the churches and the bars and the AA meetings do brisk business on the holiest of eves, because a lot of lives are flaking. Remember Thoreau: “The mass of men lead lives of quiet desperation.” Amen, and Thoreau’s observation can be most painfully true on Christmas. So we’re not mad at the season, we Scrooges. We’re mad at ourselves for allowing our existence to become one of quiet desperation.

When the holiday is a deserted street and an empty bottle, what’s to celebrate?

We have to blame someone or some thing, and Christmas won’t argue with us.

Some of us Scrooges will awaken in the morning and, I don’t know… send a kid to buy a goose?