Sean Taylor posted an interesting query on his blog http://seanhtaylor.blogspot.com/. Sean asked ‘How Pure Should Pulp Fiction Be?’ Some of New Pulp’s finiest responded. 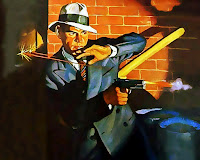 When you think of pulp fiction, what springs to mind? The hard-boiled P.I.? The lost Earthman winning and wooing on Mars? The jungle lord? The aviator adventurer? The masked vigilante precursor to the comic book super hero? Weird horror tales with skeletons and damsels in distress? (For the sake of argument, let’s all assume you didn’t immediately go to the movie with John Travolta and Samuel Jackson, even as good as it is.)

Pulp has covered many genres, and was originally so named because of the cheap paper on which it was published. Pretty much everybody who loves the style knows that.

But, over time, some genres tended to become more synonymous with the definition of pulp than others.

And some would argue that pulp itself is a genre. (For the sake of this article, we’re going to treat pulp as a style of telling a story and not a genre unto itself, since so many genres were represented within its ranks.)

To explore this idea further, we went straight to several of new pulp’s top creators. You can see their responses at http://seanhtaylor.blogspot.com/2011/12/genre-bending-how-pure-should-pulp.html?spref=tw