HANCOCK TIPS HIS HAT TO WORLDS OF FARMER VOLUME TWO! 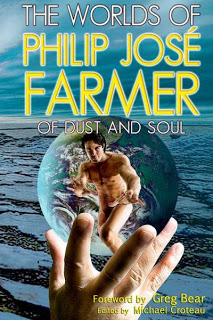 First, yes, this one is a bit late, a day or two past Wold Newton Day, my apologies.

And I sort of have to apologize a second time because this review is going to sound familiar as it is similar to the review of the two books I did discuss on December 13.  But when great follows great, there’s not a lot else to say.

OF DUST AND SOUL is the second volume of THE WORLDS OF PHILIP JOSE FARMER series from Meteor House.   Founded in essence to share Farmer’s works and his insights with today’s readers and to commemorate an imagination like no other, Meteor House strove to put together in these volumes tales indicative of Farmer’s wide swath of genres, storytelling techniques, and just an almost omniscient grasp of the literary form on several levels.  Also, Meteor House brings into these volumes essays, mostly scholarly in nature but some very personal reminisces of Farmer the man himself as well as his influence.  Now, that is my interpretation of Meteor House’s mission and such from observation and conversation with others.  IF I’m anywhere near right, then OF DUST AND SOUL is yet another triumphant step toward that goal in a big way.

OF DUST AND SOUL explores Farmer’s Worlds in a couple of interesting ways.  To sum it up best, this collection looks at what makes a being a being and why what beings believe in drive them the directions they go.   This collection contains quite a bit of Farmer’s own work, including pitches to publishers and stories.   This is a really solid look into the inner workings of this literary icon, how he functioned in his own philosophy and how he survived the philosophies of others.

This collection also brings together people who have an affinity for Farmer, but also skills of essaying and fiction crafting in their own rights.  That’s one of the strengths of Farmer’s prolific production.  It’s inviting to others, its a universe of many worlds that other talented people want to play and work and thrive in.   By far the best piece in the book, Kwasin and The Bear God by Farmer and Christopher Paul Carey illustrates that better than anything I’ve ever seen.

THE WORLDS OF PHILIP JOSE FARMER: OF DUST AND SOUL is not only a commemoration of a  man and his impact, but its the doorway into the myriads of his imagination.

FIVE OUT OF FIVE TIPS OF HANCOCK’S HAT-Most excellent indeed.