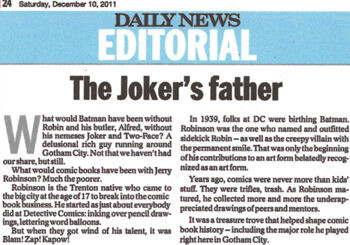 Like most popular culture websites, we noted the passing last week of Jerry Robinson. Ours had a bit of a personal touch at the end; that’s what makes ComicMix ComicMix. While I was writing the piece I heard the announcement of Jerry’s death on CBS radio. While I was impressed, I wasn’t surprised: the major comics icons get noticed these days, and Jerry certainly was, and is, a comics icon. But such wasn’t always the case.

I first saw a major to-do about the passing of a comics great when ABC-TV noted Jack Kirby’s death back in 1994. For several years prior to that the passing of an occasional comic book creator was noted in the local obituaries but significant folks like Bill Finger didn’t get national play. We weren’t important enough. We were still part of the throwaway culture; adults who read comics were considered morons. Or professionals… but only after Fredric Wertham was toast.

Kirby not only made the network news, he was chosen “Man of the Week” or whatever the segment was called at the time. That meant two things: ABC-TV already had footage of Jack in their library (a bigger deal at the time as teevee networks were only beginning to digitize their files), and the comics medium had finally earned enough respect for producers to deem one of our greatest creators as worthy of such an honor.

From that point, respect for the comics medium continued to grow. Batman instigator Bob Kane received his due and then some, Will Eisner’s passing was well-noted… to name but two. In my eyes, more than all the reviews from the intelligencia, more than all the decent comics-based movies, the national coverage of the passing of our greatest has given validation to the art form.

I read five newspapers every day, one of them a national paper, one the local Norwalk Connecticut paper. Each of these five covered Jerry’s passing. Each and every one. All but one gave the story coverage with a photo and/or art.

A few days after publishing their obit, the New York Daily News did an editorial (above). Okay, Jerry’s Sunday newspaper strip was run in that paper for several years – but that was many decades ago, and if you read their editorial they play up Robinson’s comic book work. He may have created The Joker, but he did not create The Batman. Bill Finger and that other guy did that.

That’s pretty cool. Jerry most certainly deserves the additional recognition, and so does the comic art medium.

And we deserve it, in part, due to Jerry’s contributions to our craft.