The end of the year is fast approaching, which means Certain People (I name no names) realize that they need to use up their vacation days or lose them.

Changing subjects entirely, today I took off from work, and most of what I did was bop into the city to do some book-shopping. (I had a vague idea of doing Xmas shopping as well, and even walked quickly through part of that agglomeration of festive selling huts in Union Square, but that portion of the day’s festivities was not successful.)

First I hit Forbidden Planet — pretty much as an aperitif — which I hadn’t been in for several years. (My mental map of FP is from the days when they had back issues in the basement — yes, that long ago.) I got issues of two comics for the boys, and also two extremely different graphic novels:

, the first in a new series (teen-focused, I think) by Mark “Akiko” Crilley, about a guy who discovers secret supernatural powers.

, a highly acclaimed 2009 semi-autobiographical book (by a guy who now goes under a different name, for reasons I’m not entirely clear on) about herpes. 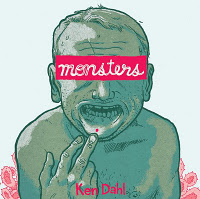 After that, I headed down the block to The Strand, which was the whole point of the trip. (Speaking of mental maps, when I was there, I was shocked to see that they don’t check bags anymore and then reminded that the childrens’ section used to be in the basement — so my standard of what the Strand looks like is also a good decade out of date.) There, I got many more books, mostly used or remaindered or otherwise non-standard:

, collecting comics work by Roger Langridge (along with his brother, Andrew) from around twenty years ago.

Proof of Life on Earth

Your Mother Is a Remarkable Woman

, an original graphic novel that came out earlier this year from the indefatigable Gilbert Hernandez, which has a loose (and probably indescribable) connection with his Love & Rockets material.

, which was the first new book of his I didn’t read since London Fields

— entirely because his prior novel, Night Train

, was such a gigantic stinker — and which I used to have, in first edition hardcover, before the recent unpleasantness.

, which is his entire short fiction, more or less, as of 2002, when it was originally published. (I’d had a hardcover copy — again, a nice first edition — and a first of the preceding UK trade paperback The Collected Mystery Stories, which was not quite as complete, back apres deluge.)

John Harvey’s Ash & Bone, part of a new mystery series by the author of the great Charlie Resnick books. (I think this is #2, but I now am not sure how far behind I am on Harvey — I kept buying/obtaining a lot of mystery writers, even as I slowed down on reading them, so my old shelves kept track for me — but now, of course, I have to try to remember!)

The brand new Daniel Handler novel for younger readers, Why We Broke Up

(with art by Maira Kalman). Handler wrote one of the very best novels about tormented teenagers of the past generation in The Basic Eight

, and also used to be Lemony Snicket, who wrote excellent books for not-quite-adults. So it’s great to see him back.

, a graphic novel by K. Thor Jensen that I remember seeing good things about.

, a dark — one might even say “horror” — novel by Stewart O’Nan, who writes great books, but I can’t read them too close to each other. (I had a copy of this one, too, in the beforetime.)

A Library of America volume

of Mark Twain, containing A Tramp Abroad, Following the Equator, and some minor travel writings.

And then I had to drag all of that stuff home, so I’m now completely exhausted…but happy. New books always mean happiness.