This is the first review of three today in recognition of Wold Newton Day.   What is Wold Newton Day?  In short, it commemorates the date in 1795 when a meteor crashed into the small English village of Wold Newton.  According to iconic Author Philip Jose Farmer, this meteor crashed as a group of people were passing through the village and radiation from the space borne rock affected the genes of these already mostly fantastic specimens in such a way that their descendants became both the Heroes and Villains of Fiction via mediums of all sorts.  This posit by Farmer led to Sherlock Holmes and Tarzan sharing family as well as hundreds of thousands of others being tangled together in the Wold Newton Family Tree.  Other writers and scholars have taken up the cause of Wold Newton and have developed fantastic tales as well as scholarly works about both Farmer and the wonderful universe he brought into existence. 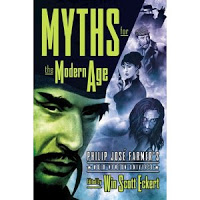 MYTHS FOR THE MODERN AGE is a wonderful piece of scholarship, a grand escapade into imagination, and a fitting remembrance of a man who with words and ideas literally captivated creators both while he lived and will likely for centuries to come.  In his introduction to the volume, Mr. Eckert, the editor, poses several questions, queries about Holmes, Moriarty, Mowgli, Doc Savage, The Scarlet Pimpernel, and more and although he states that the essays that follow do not answer every question, they prove a good place to start.

Counting the introduction, MYTHS contains 29 works, essays focused on Farmer, his work, and on Wold Newton.   Authors such as Rick Lai, Brad Mengel, Matthew Baugh, Dennis E. Power, Jess Nevins, Farmer himself, and many others fill these pages.  Names like Tarzan, Captain Nemo, Rick Blaine, Lord Rufton, Charlie Chan, Zorro, Chtulhu, Fu Manchu, Joh Carter, and oh so many more dot these pages like spectacular plumage of a grand bird.    Although not a Wold Newton Scholar, I do have a background as a historian and can say that the research and effort to be academic that went into each article is impressive and notable.   These are not people sitting around having fanboy chats, although I’m sure they all have and would do that.  This is instead a serious endeavor to bring true study to Wold Newton as a concept, to Farmer as a Man, and to the duty of imagination in furthering our society.

FIVE OUT OF FIVE TIPS OF THE HAT-You need to know what Wold Newton is?  You want to know more than just the basics?  This is as close to a Wold Newton Textbook as we may ever get.