HANCOCK TIPS HIS HAT TO THE WORLDS OF PHILIP JOSE FARMER VOLUME ONE! 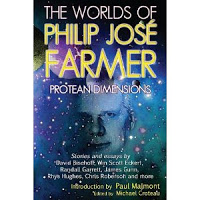 “The world is not such a lonely place as it once was.”

This, the opening sentence to Paul Malmont’s foreword to Meteor House’s THE WORLDS OF PHILIP JOSE FARMER: PROTEAN DIMENSIONS, expresses a sentiment that many of us feel because of Philip Jose Farmer.   A man who took the stories he loved and not only wrote his own tales inspired by what he loved, but took the characters he cherished and added, molded, and in many cases breathed brand new life into them, making them viable, visible, and exciting to those of us eating up his stories like pigeons on breadcrumbs.

PROTEAN DIMENSIONS is the perfect expression of Farmer’s impact on the world as well as proof that Farmer truly proved that we, people who enjoy fiction and academic discussion and theorizing and world building, are not alone in this world.   The book features works by Farmer as well as those inspired by him, even some who had the opportunity to work with him during his career.   Lost essays, long missing pieces of fiction, and even new tales inspired by the wonders Farmer rendered fill each page of this simply and nicely designed volume.    As previously stated, I’m not enough of an academic to criticize scholarship, but based on my experience as a historian, the work put into the essays is sufficient and successful.  The fiction is also top notch, both what Farmer produced and what he inspired.

If this review seems to be filled with adoration, then you’re reading it the right way.  But it’s as much adoration for the work that went into it as it is for the man it’s about.  I have seen no volume, except for maybe the sequel to this one and its predecessor, MYTHS FOR THE MODERN AGE, dedicated to any creator that does such a good job of pointing out the whole picture of the man, identifying the strengths and weaknesses of his work, and most assuredly putting the best people possible on paying dedication and tribute to who and what Philip Jose Farmer was.

FIVE OUT FIVE TIPS OF THE HAT.