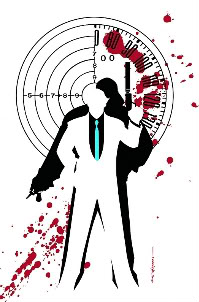 On the surface, you’d think a good action movie would be a simple thing to pull off. Take one interesting protagonist, throw a ton of complications at him, have a nefarious villain behind things, add a little mystery and simmer. It’s always surprising, then, when so many bad action movies come out.

There are many things the new The Highwaymen

comic (Wildstorm, $17.99) is not: It’s not complex. It’s not very serious. It doesn’t have all that much character development. What it does have, though, are all the elements of a perfect action movie, simmered to near perfection.

Writers Marc Bernardin and Adam Freeman follow the action rubric to a T, installing the plot (a young woman has a weapon of mass destruction inside her and everyone’s after her), the heroes (the aged Mr. McQueen and Mr. Monroe are killer and driver, respectively), and the villain (a shady leader of a U.S. government anti-terrorist organization).

I’m sure there will be those who dismiss this book as pop corn, but the thing about pop corn is, it’s hella good ever once in a while, especially when it’s popped just right.

The Highwaymen is pretty well nonstop action along a taut storyline, executed quite well by artist Lee Garbett (his work is similar to that of John Cassaday, except Garbett actually draws backgrounds). In short, the book just tries to be a really good action story, instead of overreaching for some grand purpose. It’s just violent and frivolous and fun, and there’s not a darn thing wrong with that.