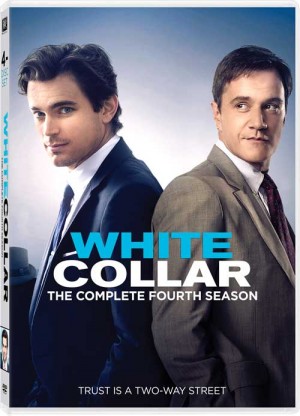 USA’s shows make up for small budgets with winning high concepts and appealing casts. Many of their series work entirely because of their superb eye for casting, using familiar faces and strong ensembles. These shows have also worked thanks to adding season-long meta-stories while solving case-of-the-week stories. As a result, the leads are generally put through the wringer, each taking a turn.

In the case of White Collar, the third season ended with Neal Caffrey (Matthew Bomer) on the run with an international manhunt launched to find the felon turned FBI advisor. The fourth season opened over the late summer of 2011, finishing up in the winter of 2012 and is now collected in White Collar the Complete Fourth Season, released this week by 20th Century Home Entertainment. Bookending the sixteen episodes, it’s his FBI handler and now best friend Peter Burke (Tim DeKay) in hot water.
In between, the long-simmering matter of Neal’s past is finally brought to light as he learns more than he wanted to know about his father James (Treat Williams). In fact, those revelations set Peter against Senator Terrance Pratt (Titus Welliver) which plays out over the final eight episodes. Further complicating Peter’s career is the arrival of Assistant Special Agent (in charge) Amanda Callaway (Emily Procter). When James commits murder and leaves Peter framed for the crime, Neal has learned a harsh lesson and we have to wait until October to find out what happens next.

Along the way, the series continued to rearrange the deck chairs so friendships are tested and reforged time and again but at the core, there’s Neal and Mozzie (Willie Garson), Neal and Peter, and Peter and Elizabeth (Tiffani Thiessen). Of the core cast, Thiessen is left with the least to do with one exception, “Shoot the Moon”, when she and Peter both get kidnapped by would-be criminals. At the FBI, stalwart supporting cast members Marsha Thomason and Sharif Atkins do a fine job carrying the spears but have little of substance to do, which is a shame since Thomason’s Diana is intriguing.

The series does a nice job with guest casting, kicking off with the much missed Mia Maestro seen in the first two episodes as is Mekhi Phifer. And of course there’s Hilarie Burton, back as Neal’s lover Sara Ellis, who really should just settle with him but that would make boring television. 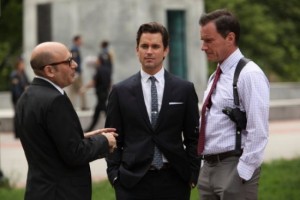 Some of the cases get hokey such as when Neal and Peter have to box in an underground boxing club or the last few episodes as they search for a valuable McGuffin within the Empire State Building. But given the beguiling performances and eternal twinkle in Bomer’s eye, you forgive a lot. The show may be starting to slow down as season five had its sixteen episode order trimmed to thirteen so enjoy these while you can.

The bonus features on the four disc set are largely made up of deleted scenes, found on each disc, along with the perfunctory gag reel. Tim DeKay—In the Director’s Chair looks at the star taking charge of an episode and the final episode, “In the Wind”, gets commentary from Bomer, DeKay, Garson, and series creator Jeff Eastin.