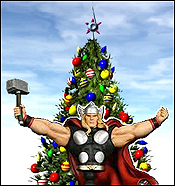 The Christmas tree. Big, small, authentic or fake, the object of worship at Rockefeller Center for New Yorkers and tourists, the spindly little tree that Charlie Brown adopts, and always, always, beautiful, I do hope you know that the evergreen tree (fir, spruce, or pine) didn’t grow in the hot, dry, climate of Bethlehem and Nazareth. (But the Egyptians did have a midwinter rite – see below.)

Courtesy of The History Channel and my fascination with pre-Judeo-Christian religions – I’ve delved a little bit into Wicca – here’s a brief history of our favorite symbol of the season, the Christmas tree.

For centuries in Europe and England, before the introduction of Christianity, plants and trees that remained green all year had a special meaning for people. To ward off the ghosts, witches, and evil spirits, they made wreaths of, and hung branches from, the fir trees that were “ever green.” During the winter months, as the days shortened and the world became dark and cold, it was believed that the sun god had turned their face from them. On the winter solstice, the shortest and darkest day of the year, the people would celebrate the return of the sun god, dancing in a sacred circle around a chosen evergreen tree (fir, spruce, pine) and light fires to bring back the light.

By the way, fellow comic geeks, in the Germanic and Scandinavian regions, the tree was called Thor’s Oak. Hey, Marvel, how about a Christmas Special featuring the tree and the Asgaardian?

Another origin has been proposed for our favorite Christmas image, that of the “Tree of Paradise,” which was used in the medieval plays performed on Christmas Eve to tell the story of Adam and Eve. It was decorated with apples – some say pomegranates – to represent the forbidden fruit, and Eucharist wafers to represent God’s deliverance; later on, in the 16th century, the Germans began placing the trees inside their homes, and the apples were replaced by shiny red balls.

So what were they doing at this time of year in the Fertile Crescent of the Mediterranean? Well, the Egyptians prayed to the Sun god, Ra, who would annually come near to death as the winter progressed. On the day of the solstice, when the sun – Ra – began to strengthen, the Egyptians would bring the green leaves of the palm trees into their homes, which symbolized Ra’s victory over death. (Hmm…palm leaves. Eternally green. Symbols of another resurrection one that is central to the Christian faith.)

The Romans celebrated the Saturnalia on the winter solstice, in honor of Saturn, the god of farming and agriculture, because they knew the shortest day also marked the return of spring and summer, when the land would be fertile once again.  The Saturnalia, by the way, was converted to Christmas, to mark the birth of Jesus by the Emperor Constantine, after he experienced a vision and ordered the conversion of all Roman citizens to Christianity. (And did you know that Biblical forensic astronomers believe that Jesus was actually born in the spring, according to the position of the stars at that time?) Anyway, the Romans also marked the Saturnalia by adorning Saturn’s temples and their own homes with branches of the evergreen trees that grew in that region.

The Celts of England, Ireland, and areas of northern Europe also celebrated the winter solstice with evergreen trees, to them also a symbol of eternal life. They would select a tree about which they danced, and lit bonfires to encourage the dark gods to leave.

When did the Christmas tree as we know first appear in America? Well, the Puritans – of Thanksgiving fame – felt that Christian worship had become frivolous and full of pagan rites. They believed that Christmas was a sacred, awesome – not as in “Awesome, bro!” but in its original meaning of “God-fearing and awe-inspiring” – outlawed the celebration of Christmas with trees, and even carols; those who dared were put in the stocks or worse!

The Germans, especially those who settled mostly in Pennsylvania, are credited with bringing the Christmas tree to America in the mid-19th century, but most Americans of the time were still heavily influenced by their Puritan roots, and believed the tree was a pagan symbol and refused to raise one either in their communities or their homes

Then, in 1846, Queen Victoria of Great Britain and her German-born consort, Prince Albert, appeared in the Illustrated London News celebrating Christmas with a tree. Like Anglophiles today who faithfully follow the affairs of the Windsors – and comic fans who believe that only the Brits know how to write comics – anything that came from across the pond was immediately declared fashionable and de rigueur.

If you watch either Jon Stewart on The Daily Show or Bill O’Reilly on The Factor, you know those two are at their annual “The War on Christmas” shenanigans, with Stewart poking fun – and getting pissed off – at one of O’Reilly’s favorite topics, as he rages against the ridiculous, “pinheaded” political correctness of the season.

And you know what? I totally agree with O’Reilly on this one. Oh, not on his overblown rhetoric – although that’s O’Reilly’s raison de guerre – but essentially, I believe he’s absolutely dead on regarding this one. The celebration of Christmas is an American rite of passage, which should be holy and sacred to those of the Christian faiths, but more often, these days, a commemoration of that other American religion – buying on credit and going into debt.

Next week: My Christmas, Chanukah, and Kwanza shopping suggestions.