ComicMix Six: Every Panel You’ve Ever Visited At A Convention! 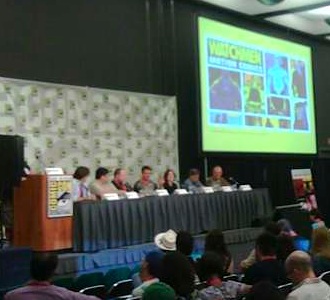 With the Chicago Comic-Con and WorldCon both around the bend, you may be tempted to waste your days away at the panels off the main floor. But I say, gentle geeks… NAY! Why waste your precious con time in stuffy rooms with stale ice water and tons of other mouth-breeders, when you can peruse the artist alley (where local, hip and trendy comic creators like to be… ahem…), grab schwag at the big booths (or not if YOUR local con has no big booths this year… epic fail…) or spend all of your inheritance on the dealer floor!

But Marc, you plead, I’m tired! I want to make my voice heard! I need to learn hot new tips and skills on how to make my portfolio Marvel worthy! Well, I said it once, and yes… I say it again: NAY. Why, you ask? Because ALL panels at comic conventions break down into one of these top 6 over-done panels:

1. “Mondo-Nation-Neighborhood-Universal-Pow-Wow”
Yup, this is the stalwart gotta-go-to panel they hype and hype and hype. Hey! Do you want HOT, never-seen-before, uber-rare, special sneak previews of all the things to come?! Well cart your XXL self on down to Hall H for a sensational panel that’s sure to knock your sock and sandals combo clear off! Drooling yet? Well, sop it up, fanboy. Thanks to the interwebs, all you’re gonna get is a rehash of the solicits you read about months ago on ComicMix, IGN, Newsarama, Comic Book Resources, CSN, or a hundred other places. And those special sneak peaks you’re just vibrating to see? Yup… posted on the artist’s message boards about the same time you were reading those months-old solicits! And you were counting on some tantalizing rumors about all your favorite characters? Well Bucko, are you in for a treat! Turns out the big boys can’t tell you anything you can’t (and most likely DID) read in Wizard itself, last month. Sounds fun? Sounds to me like 2 hours of time you could have spent waiting in line to get that Red Hulk Sketch Holofoil Variant Cover 17B signed, kiddo.

So, you’ve polished
up your portfolio a hundred times over. You perma-sealed each
overwrought pin-up of girls in impossible poses, and
teeth-gritting-leather-clad-uber men carrying guns bigger than their
terrifying biceps in the finest space age polymers…. all zipped up in
corinthian leather. And you writers? You have 180 pages at the go, in
every genre, in every shape and size, for every major and minor company
known to man. But you just haven’t figured out that ONE thing that will
get you sitting between Geoff Johns and Bob Wayne at the next DC Nation
panel. Well, put on your least dingy polo, and shave your face a day
early, and come on out to a waste of your time! Industry middle-men, or
half-known freelancers will be happy to wax poetic on how they
accidently threw up on an editor at the after-con beer fest… and how
it lead to a conversation which opened the door for them to submit
pages for an Aquaman Annual back in
Nineteen-Eighty-Who-Can-Remember…and that’s all she wrote! Wanna save
yourself an hour you’ll never get back?

Do what the rest of us are
doing. Work hard on your own, and pray to Satan someone notices you
long enough to care. And if you get an opportunity? Well, how about
some real advice: Work on schedule, please your editors, and do the
best damned work you can.

3. “A Friendly Conversation About Our Company, with Special Guest… YOU!”
Kick
back, relax, and enjoy some quality time with your favorite creators!
It’ll be nonchalant! It’ll be fun! It will be a complete load of BS and
a solid chunk of time you could have been eating a ten dollar hot dog!
Big companies love to host these “For-the Fans” panels where they
lovingly adorn the stage with their top dog creators. You’ll applaud
them until your fingers bleed, in hopes that they notice YOU, and want
to talk to YOU. But guess what? You’re just their meal ticket, pal.
Sure, they want to talk to you, shake your hand (if they have a vat of
Purell handy), and answer your questions. Seriously. But, put em all on
a dais, and soon enough, you got yourself a real treat. People who
never see each other outside the actual cons, swapping inside jokes,
and knowing laughs, while you, the adoring public look on in amazement.
And then, even better, they place a few mics out into the crowd and let
YOU, yes, YOU, ask anything your heart desires. And that, my friends, is
where we nerds really shine!

Given the opportunity to pose challenging
questions to our favorite fiction writers and artists… we generally
come up with such zingers as “When are you gonna put out “BOOK I LOVE,
THAT DIDN’T SELL AT ALL” in trade format?” … “When are you gonna put
out a book about “CHARACTER THAT NO ONE BUT ME CARES ABOUT, EVER, IN
ANY WAY, AT ALL…?” … or my personal favorite…. “I don’t actually
have a question, I merely want to bitch, and piss, and moan about why
you killed my favorite character, raped another, or did something I
personally think contradicts a stalwart characterization of my favorite
character or favorite story, and now I just need to let you know my
extreme level of discontent. Oh, and I’ll still probably be buying the
major crossover event anyways.”

And guess what? They don’t
reveal anything you didn’t already know, or they didn’t plan to leak
out anyways… several days later. Now go get that overpriced hot dog.

4. “Q and A: With The Flavor of the Week!”
Because
you haven’t heard your favorite anecdote about how bad the Chewbacca
costume smelled enough… Because you need to know what soda Dr. Who
would drink… Because you think an actress who played a role twenty
years ago actually remembers anything that happened in a film she
probably got in for because she was boinking the gaffer… We have “Q
and A”. Not unlike the “Friendly Conversation” Panel from above, the “Q
and A” panel is a specific type of idiocy where has-beens, and
want-to-be’s like to flock to. Would-be actors and actresses hope that
by asking some brilliant question, they might learn the secret to
nailing the part of “Asexual Alien” on the next Galaxy Star Battactica.

And sure, sometimes, a real hip and urbane creator will host
one of these events. They’ll smoke a cigarette, drink some whiskey, or
just whore out all their projects (looking at you, Kevin Smith) all in
the name of “doin’ it for the fans.” Well… big surprise. They’re
doing it for the comped rooms, free dinners, and brown-nosing that
comes free with the session. I know it hurts to hear it friends. But “Q
and A” doesn’t stand for “Questions and Answers” … it stands for
“Quotas And Ass-Kissing”.

5. “Digital Comics: This Year, We Swear, It’s Gonna Happen”
Look,
every year, they raise their arms and scream to the heavens… Printed
comics will die! No one will read tangible pages in another year! The
next generation will have to visit museums to even know what a
comic-book actually is! It’s been 9 years and
counting that I’ve heard it.  The advent of webcomics has certainly
opened the forum for discussion. But guess what? Scott Kurtz is happy
to see PvP collected, and so are you. Attend this panel, and you simply
give credence to the same luddites who said Beta-Max would destroy VHS.

Let me make it simple: Motion Comics? No one gives a rats ass. iPhone
App Comics? Cool, but you won’t be getting all your weekly books on it for
years to come. Online Subscription Comic Services? Marvel’s still
counting all six hundred bucks it’s made.

6. “A
reflection on the pontification of fiction and the related debates of
the idiosyncratic hyperbole in American short graphic fiction.”
Last,
but certainly not least, comes those rarified panels where you think
you’ve truly found a diamond in the rough. It’s located in the smallest
panel rooms. When you enter, there’s only a handful of guys sitting
down, and at least one of them is just doing it cause he’s out of
shape, and needs to grab a few cups of that free and delicious
con-water. They usually feature complicated titles that you yourself
aren’t entirely sure you get, but hey, you ARE a lit major with a
creative writing minor. And you blog. A lot.

Every year, the con is
glad to host some collegiate tenured professor, and his plucky TA. The
professor of course still collects Scrooge McDuck comics… while his
TA privately thinks comics are for simpletons who like ‘purty
pit-chers’, but needs to score some extra credit hours. These panels
wax poetic about non-issues like “the space between the panels” and the
“use of flat color fields to define emotional responses”. In reality?
You’ll spend a solid hour confused as to why this industry outsider is
given time to rant to you and guy-who-needs-a-drink.

In some cases, you
might actually convene at one of these panels hosted by an ACTUAL
industry guy… But trust me. You won’t get “pontifications on fiction
and the related debates of hyperbole”. You’ll get anecdotes about
vomiting on an editors shoe, back in 1989. You’ll get a retrospective
of every comic the guy poured his soul into, but was outsold by Secret
Wars… or you’ll get an angry rant about the state of the industry,
and plea to buy his new creator owned book at artists alley.

But
trust me kids… save yourself from this panel, and just visit him in
the alley instead. It’s still a good read. You just don’t need him to
tell you that.