FORTIER TAKES ON FAIRIES AND GOBLINS!

ALL PULP REVIEWS BY RON FORTIER

About the Author –
Doug Farrell has been a professional actor most of his adult life and spent several years performing comedy a Los Angeles improve troupe. He’s married to his best friend Ellen and raising three remarkable children with her. He taught college classes, was a vegetarian chef and installed home theaters. Recently at night he’s been a guide for ghost tours, telling Savannahs’ paranormal stories to people from around the world. This is his first novel. 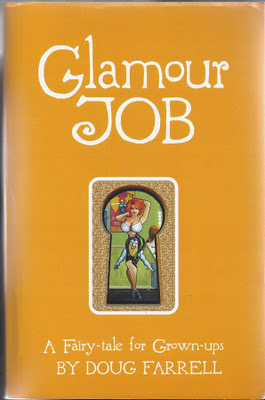 Every now and then, I trip over a book that’s really hard to describe genre-wise and this is such a case. It’s a madcap adventure that falls somewhere between fantasy, slapstick comedy and social satire. That all these elements mix effectively and in the end produce a heady concoction of genuine adult delight is a testament to Farrell’s own imagination in brewing what he aptly describes as “A Fairy-tale for Grown-ups.”

The set up deals with a fairy war that occurred in another dimension wherein the goblin race lost and was forced to flee to our world, arriving in 1947, two years after the end of World War II. Convincing certain human scientist to help them, the goblins invented special disguises that allowed them to go undetected in our world and for decades walked among humans, some even interbreeding with them. Ultimately the same scientists who developed these sophisticated camouflages saw the potential for monetary wealth by using the same formulas to create beauty aids for human women. They create Glamorine, a Chicago based million dollar cosmetic empire built on the results of these techniques and certain globin magics.

The book’s theme plays with duel definitions of the word glamour. The first being a quality of fascinating, alluring, or attracting, especially by a combination of charm and good looks. It also means magic or enchantment; spell; witchery.

The protagonist is super model and the face of Glamorine, Laurie Morgan, whose grandfather was one of the scientist who created the company. As the story opens Laurie has become disillusioned by her near perfect life and is in the process of divorcing her loving husband, Nick. Laurie is suffering from ennui unable to explain her own dissatisfaction and believes she’s become trapped in a dull, boring routine of existence. No sooner is the divorce granted then she is contacted by a blue gnome name Hawley disguised as a little girl. He warns Laurie that her life is in danger. As if confronting an actual blue dwarf weren’t enough, Laurie begins to running into women throughout Chicago who looked exactly like her.

As paranoia begins to set in, Hawley explains that there is a goblin revolution in the works. After decades of living in secrecy amongst mankind, a group of goblin leaders have concocted a scheme to take control of Glamorine and replace its board of directors, including Laurie and her grandfather, with phony disguised goblins. Once they’ve achieved this end, they plan on poisoning the cosmetics produced to Glamorine to eliminate all of mankind and take over the Earth.

Needless to say having an army of vicious goblins out to do her in is more than enough motivation to snap Laurie out of her malaise and back into living at full tilt if only to stay alive. Before the book’s conclusion arrives, she will have been held prisoner in an underwater complex below Lake Michigan, met and been devoured by a fire breathing dragon and allied herself with tiny pig-fairies only she can see. “Glamour Job” is a rollicking tale that never lets up and is filled with satirical jabs at how we treasure a make-believe beauty that is simply an illusion devised by Fifth Avenue to milk millions from starry eyed little girls all wanting to grow up and become runway princesses. But do be warned, this is only the first chapter in a trilogy and the ending does come somewhat abruptly.

We also note by the print date that “Glamour Job” is four years old. All the more reason to seek it out as it might have flown under your radar. Urban fantasy isn’t one of this reviewer’s most favorite genres, but “Glamour Job” has enough action muscle to sustain it for even the most jaded pulp reader. If you are looking for something truly different and fun, you would be hard press to do much better than this book.