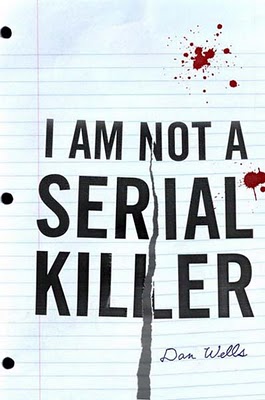 John Wayne Cleaver is not a serial killer; he wants you to know that up front. He’s also not, sadly, a typical American teenager, though he somewhat wishes that he could be. Thirdly, he’s not officially a sociopath — that diagnosis can only be given to an adult, and John is only fifteen. What he has is instead called Antisocial Personality Disorder — he has an almost complete lack of empathy, simply not understanding what other people’s emotions are or connecting with them directly.

So John has to work his way through life by intellectually building models of what he thinks people are feeling, and of how he should respond to those feelings, and continually adapting his models to get closer to reality. He’s not all that good at it at the beginning of I Am Not A Serial Killer

, the first novel he narrates, but give him a break: he’s a fifteen-year-old boy from a small town, and his brain doesn’t work the way everyone else’s does.

To make matters worse, he’s obsessed with violent death and with serial killers — and he’s smart enough to have noticed that he has all of the standard characteristics of a serial killer: a distant, abusive father who abandoned him, high IQ, frequently bullied, a fascination with fire, even bedwetting. And he doesn’t really want to get too far away from death — the most soothing thing in his life is helping out his mother and aunt in their family business, the mortuary downstairs from their apartment. But he definitely doesn’t want to kill people, and has built up a regimen of rules and avoidance techniques to keep the thoughts of torture and death at bay.

But then a real serial killer starts stalking John’s home town — Clayton, North Dakota [1] — and John can’t help but follow the case, working up his own profile of the killer. It gets worse when John accidentally sees the killer in action — and realizes not only that the murderer is his friendly elderly neighbor, Mr. Crowley, but that Crowley is some kind of supernatural creature, taking body parts from his victims to replace his own deteriorating organs and limbs.

So John has a dilemma: he’s organized his entire young life into stopping himself from killing people…but is Crowley really people? Or can John use his murderous impulses to eliminate this “demon,” stop the terror engulfing his town, and do some good? And, even if he does, will the part of himself he calls “Mr. Monster” want to stop?

That’s the situation very soon after the beginning of Dan Wells’s exceptionally readable and engrossing first novel, I Am Not a Serial Killer. John’s voice is clear and crisp, and his emotionally blinkered view of the world is occasionally reminiscent of The Curious Incident of the Dog in the Night-Time

. Wells gives the reader enough information so that we know what emotions the other characters are feeling, even when John doesn’t. Even better, Wells keeps the book moving at a brisk clip the entire time, without resorting to cheap thriller theatrics; Serial Killer has a relatively relaxed pace of external events, and is driven primarily by John’s voice and self-control.

Since I’ve already called this a trilogy, even the dullest reader won’t be surprised to learn that John and Clayon County survive their first serial killer, and you’re probably suspecting that wasn’t the end of his troubles. And Mr. Monster

does see a second serial murderer turn up in town, only a few months later, while I Don’t Want to Kill You

sees John become more proactive, calling out another one of the mysterious creatures — he calls them demons; they call themselves gods — and luring it to town. But there’s no reason that Kill You needs to be the end; Wells leaves room for further sequels, and there’s room for several more stories about John and his demon-hunting.

Even if there aren’t any more, though, these three book are a wonderful find: smart, zippy stories, told in the voice of an intelligent but very non-neurotypical young man, with excellent gory details about embalming, serial murder, and other related grisly subjects. They straddle the line between adult and young-adult fiction — particularly since there’s no sex in them; like most US parents, John is much more comfortable with blood and gore than he is with squishier human contact — and so they might be appropriate for you, or for that somewhat odd teenager that you know. I enjoyed them hugely, and went out of my way to find copies of Mr. Monster and Kill You after reading Serial Killer as part of the Hugo Voter’s Package; this is the kind of series that drags you forward headlong and leaves you wanting more.

[1] Though we don’t actually learn the state until page 24 of the third book, I Don’t Want to Kill You.