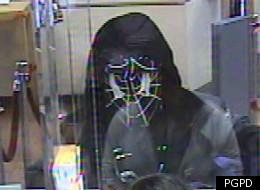 Hat tip to Peter David, who sent this out with the note, “Holy crap. J. Jonah Jameson was right all along.”

Prince George’s County Police Department is looking for an armed man they suspect robbed a BB&T bank in Fort Washington, Md., on Wednesday afternoon. According to the police department’s blog, the man robbed the bank while wearing a Spider-Man mask and matching Spider-Man sweater:

The suspect is described as an unknown race male in his 20’s, around 5’5”-5’7” tall, and weighing between 150-170lbs. He was last seen wearing a black and gray “North Face” jacket, a black hooded “Spider Man” sweater with a spider on the chest, a “Spider Man” mask with a white web design, black shoes with white soles, gloves, a blue canvass bag, and armed with a silver handgun.

Maybe the new movie is going over budget, and Marc Webb needs to make up the shortfall?