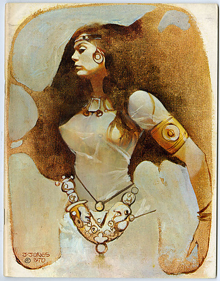 In comics, her work appeared in Heavy Metal, the various Warren magazines, Epic Illustrated, and many, many others. Committing herself to illustration in general and expressionism in specific, she was a member of the legendary Studio along with Michael Kaluta, Barry Windsor-Smith and Bernie Wrightson. Jones’ illustrations graced a great many science fantasy novels (Michael Moorcock, Dean Koontz, Fritz Lieber, Andre Norton, and others) and magazines as well as publications such as The National Lampoon.

Her work has been reprinted in a number of albums, most recently IDW’s [[[Jeffrey Jones: A Life In Art]]]. This ironically titled tome was released at the beginning of this year.

Jones married Mary Louise Alexander (now Louise Simonson) in 1966 and had a daughter, Julianna, the following year. In 2001 Jeffrey had gender reassignment surgery. In recent years she suffered from numerous ailments, but had made a sadly brief return to the drawing board last month.

In one of the highest compliments imaginable, illustrator Frank Frazetta called Jones “the greatest living painter.”