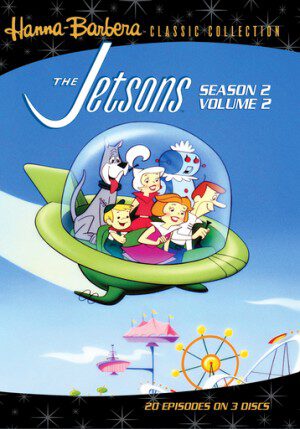 Warner Archive has been doing an excellent job dipping into the vaults and finding films and television shows for all ages, producing them on-demand for the seriously interested fan. What seems baffling, though, is the time between some of their releases. Take The Jetsons, no, not the 1962 gem but the 1980s revival. Warner released season one from this Saturday morning show a while back and then offered up the first 21 episodes from season two in June 2009. Finally, The Jetsons Season 2, Volume 2 has been released, in time for the holiday season.

Originally, this futuristic situation comedy was modeled at the popular Jackie Gleason series The Honeymooners but found its own voice as the space age family of the future lived a life most families dreamed of: push button cooking, self-folding cars, machines to dress you and help with makeup. It was all far from perfect as we used to see during the end credits as the treadmill George Jetson used to walk Astro went haywire.

Despite a single season of prime time, the original show went on to syndication nirvana, appearing weekdays during the afternoons or weekends as part of the Saturday morning lineup throughout the 1960s and 1970s. The revival was purely kid stuff as you can tell from the more juvenile plotting and more outrageous situations the family found itself in. In addition, young Elroy befriended Orbitty, a fuzzy alien as a sidekick – a seemingly mandatory Hanna-Barbera touch and since they already had a dog, an alien was the next best addition. Also joining the extended supporting cast was Mr. Spacely’s brother Orwell whose inventions propelled more than a few plots.

The stories found in these two discs all have their moments of slapstick and warm humor along with moral lessons they all learn, although George seems to be the one most in need of help. We also get heavy doses of stories lifted from other works such as “Elroy in Wonderland” and “The Swiss Family Jetson” which kick off the set and “A Jetson Christmas Carol” which closes out the season. They also parody the popular ABC series Fantasy Island with “Fantasy Planet” although it just made me miss Ricardo Montalban. In “Jetson’s Millions”, George wins a lottery and suddenly is part of the same class as the Spacely’s and an unflattering rivalry ensues.

The characters are true to form with George lazy as ever, Jane occasionally giving in to her wild side with disastrous results, boycrazy Judy, and prototypical good boy Elroy. We see their fortunes rise and fall, success coupled with failure and an enduring optimism that keeps you coming back for more. The family housekeeping robot Rosie is nowhere near seen often enough.

The synthesizer sounds added to the score somewhat date the episodes along with the topical references which viewers today may find puzzling. The computer animation also makes things look a bit different than the original cel animated style. As you would expect, transfers from 1980s material are pretty clean but not perfect. The sound is fine and overall, it’s nice to have these for your home, even if they are inferior to the original series.